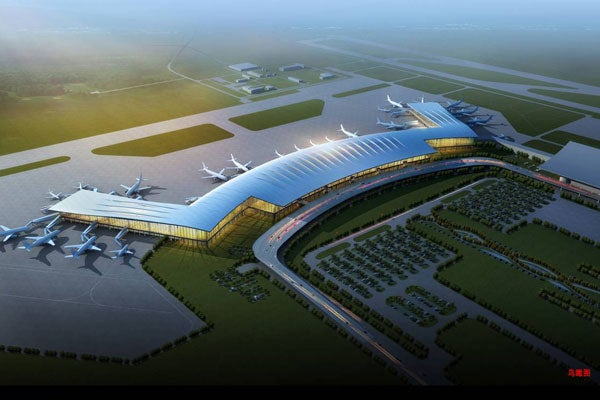 "The new terminal T3 opened in August 2013 and is currently the only operational terminal at the airport."

The feasibility studies for the expansion project were conducted by the China Aviation Construction Group Corporation (CACC) Beijing in collaboration with the ADPI in 2008.

Construction of the new runway started in 2012 and is expected to be complete by 2015.

New airfield facilities for cargo handling and a catering centre will be also constructed as part of the expansion.

The airport terminal features two concave steel roofs whose apexes are staggered towards another in imitation of Chinese pictography. The glass-glazed facades create a light and airy atmosphere inside the terminal.

The airport features LCD screens, ATMs, a Bank of China branch, hotels, lounges and restaurants. A baggage hall is located on the ground floor of the terminal.

The airport provides artificial broadcasting, luggage storage and emergency medical services for the passengers. Special passenger services such as wheelchair and escort services are provided for disabled passengers.

Runway at the Shenyang Taoxian Airport

The airport has a 3,200m-long and 10,499ft-wide concrete runway. The runway features two-way instrument landing systems. The new second runway that is under construction will be 3,600m long and 60m wide. It will feature precision approach lighting systems.

ADPI provided planning and supervision services for the construction of the new terminal.

Obermeyer served as the lead architect while Kohlstrung International Architecture & Urban Design Consulting was the chief architect for the T3 terminal.

A new passenger railway line was opened at the airport in March 2012. The modern streetcar at the Taoxian Airport Station provides rail transport services for the passengers. The street car services started in August 2013.

The Shenyang Metro Line 2 opened in January 2012 can be accessed from the new terminal (T3) at the airport.