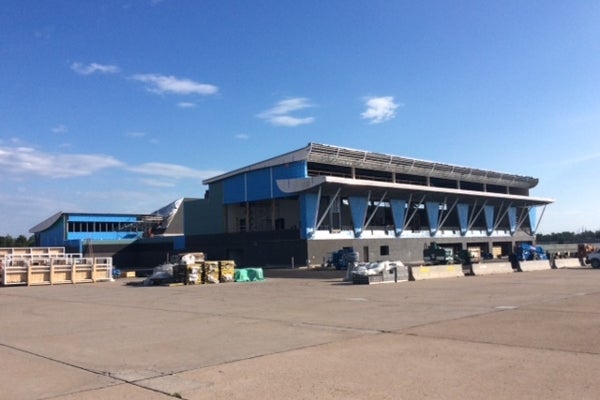 Plattsburgh International Airport is located south of Plattsburgh city in Clinton County, New York, US. It promotes itself as Montreal’s US airport due to its proximity to Montreal, the second biggest city in Canada, and northern New York.

Owned and operated by Clinton County government, the airport is created from the former Plattsburgh Air Force Base and serves as a multipurpose aviation and aerospace complex.

The airport covers an area of 1,912 acres and features a passenger terminal building and a runway. Air carriers such as US Airways Express, Allegiant Airline and Spirit Airlines offer services from the airport serving the residents of northern New York, southern Quebec and Vermont.

The passenger terminal expansion is being carried out in two phases. Starting in late 2014, phase 1 included the expansion of parking lot to double the capacity to 3,300 spaces.

The phase 2 expansion was initiated at the end of 2014, and comprised the expansion of the terminal area by increasing the number of ticketing counters and security checkpoints, and expanding the baggage claim area, and concourse and gate areas. It also includes developing a customs facility, integrated into the terminal, which will establish the airport as an official international port of entry.

The terminal will have four gates, of which Gate 4 for boarding has begun operations, while Gate 3 is expected to be operational in the coming weeks.

The US Transportation Security Administration (TSA) security checkpoint, which was located on the ground floor of the terminal building, has been moved to the second floor. The relocated facility includes a whole body imaging machine, in addition to a walkthrough metal detector.

The outbound baggage handling system has been made online. It consists of a state-of-the-art conveyor system that provides efficient baggage movement from ticketing counter to the aircraft. The project will also add a similar system for baggage coming-off of arriving aircraft.

Other developments at the airport include utility building and outbound baggage expansion, walkway installation, jet bridge relocation, demolition of concession area south and west walls, and creation of two front entrances with an elevator, stairs and escalators to access the second floor of the terminal.

The phase 2 expansion is scheduled for completion by mid-2016.

Financing for the expansion

Details of the existing passenger terminal

The original 35,300ft² terminal was constructed with an investment of $20m and was opened for passenger operations in 2007. The two-floor facility was designed to handle any kind of aircraft with special features, including a jet bridge.

"The expansion will enable the airport to meet the current and projected growth of more than 300,000 passengers a year."

Plattsburgh Airport features an 11,750ft asphalt/concrete/grooved runway, designated as runway 17/35, with 1,000ft of paved overrun at each end. It is equipped with medium-intensity approach lighting system and alignment indicator lights.

Fuel-related services and other ground handling services at the airport are provided by Volo Aviation, a fixed-base operator (FBO).

Parking at the airport is located a few steps away from the terminal, making it easy for the arriving and departing passengers. A free shuttle service is available to/from the parking lots.

A variety of transport services such as shuttles, car rental, limo or taxi and buses are available from the airport.