Expand
Space for a people-mover connection to Luton Airport's mainline railway station was provided alongside the new access road.
The 1999 terminal (centre right) accommodates check-in and retail functions previously in the 1985 terminal (centre left).
A recently added business model is represented by business-class operator Silverjet.
Adding more gates and improved airside facilities, the new terminal also closed Luton Airport's original access road.
Although a compact site, LLA has extensive support facilities, including Monarch Aircraft Engineering (pictured).
Luton-based EasyJet is the main low-cost operator at the airport.
Luton has a cargo terminal and fixed-base operations of Harrods Aviation and Signature Flight Support.
Withdrawal of the LLA Master Plan in 2007 appears to have lifted the threat to the rural landscape east of Luton. 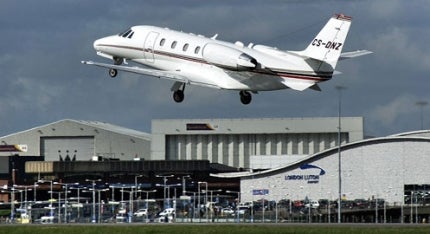 Just 20 miles from London’s northern fringes, London Luton Airport is a success story in British civil aviation. Founded in 1938 as Luton Municipal Airport, its history is characterised by additions and alterations, and having ridden high on the waves of first the holiday charter market and latterly the low-cost carrier revolution.

"London Luton Airport is a vital component of the local economy."

The adjoining large town of Luton has suffered the loss of several large-scale employers over recent years and London Luton Airport is a vital component of the local economy. It directly employs just fewer than 500 people, with 8,000 jobs estimated to be supported by the airport’s presence.

In spite of past reversals like the 1974 collapse of holiday company Clarksons / Court Line, Ryanair transferring operations to Stansted and the failure of Debonair, also centred on Luton, the airport has experienced a long-term trend of increased business.

The airport handled 9.5 million passengers and 99,299 aircraft movements in 2011. It is the fifth largest passenger airport in the UK serving over 90 destinations across Europe, Africa and Asia.

London Luton Airport has many elements in its business mix. Now eclipsed by low-cost operations, Luton maintains its long-standing association with holiday charters through key operators Monarch, Thomson (formerly Britannia), First Choice and Thomas Cook. Monarch Aircraft Engineering is one of the largest of several such facilities located at the airport.

Evolving from an airfield developed as a World War II US bomber base, Stansted Airport takes its name from nearby Stansted Mountfitchet in Essex.

Luton is the original base and headquarters of EasyJet, Europe’s fourth-largest carrier, and the largest operator at London Luton Airport. Although it announced the closure of its call centre in 2007, the airline has established a maintenance facility in former Britannia premises.

With easy access from the London conurbation, the airport is one of the UK’s main centres for business aviation. Harrods Aviation and Signature Flight Support are the main providers of the airport’s extensive support services. Although a move to London Heathrow was considered, business-class airline Silverjet started with a service to Newark Liberty International and has built private terminal facilities at London Luton Airport.

The mid-1990s saw significant developments such as enlarging the terminal, a new freight facility and control tower. A new road greatly improved access via the short tunnel under a taxiway and giving better road connections towards the M1 motorway. The tunnel includes space for a people-mover / tramway connection (currently maintained by a free bus shuttle) with Luton Airport Parkway railway station, about a mile distant.

"It is the fifth largest passenger airport in the UK serving over 90 destinations across Europe, Africa and Asia."

Owners Luton Borough Council triggered a substantial transformation of the site when they launched a public private partnership in 1997. London Luton Airport Operations Limited (LLAOL), later to change ownership early in its 30-year projected lifespan, was to provide £80m funding for a redevelopment that included the new £40m terminal opened in 1997.

The distinctively styled building faced the 1985 terminal, many of the functions of which it has replaced, notably in July 2005 when the upper story became the main airside lounge and retail / catering area. Connecting the new terminal to the central core severed the previous road access to the airport, completing the reorientation of traffic towards the south-west.

The project also created more departure gates, aircraft stands, with repositioned customs and immigration. More operational flexibility resulted from the completion of a circuit of the central area by taxi-ways.

In contrast to the incremental changes over many years, in 2005 the operators announced a programme that would radically reshape, enlarge and reposition London Luton in the airport market.

Responding to the 2003 white paper ‘The Future of Air Transport’, which identified a growth potential up to 30 million passengers a year by 2030 (it was 8 million in 2003), airport operator TBI published its £1.5bn master plan in October 2005.

The radical vision included a second runway – the current one being retained for taxiing and emergency use – being built to the south-east side of the existing perimeter that would have pushed into farmland and small communities, also involving extensive reshaping of the hilly landscape.

A new terminal and control tower also formed part of the plan, which was to powerfully reignite long-standing opposition to increased air traffic at Luton.

This was most vocal around the rural eastern end of the airport that would be most affected by the development and ensuing aircraft movements.

Unexpectedly, the operators announced in July 2007 that, in view of uncertainty over the scale of returns within the balance of their 30-year tenure at Luton, the Master Plan was withdrawn.

"Luton is the original base and headquarters of EasyJet, Europe’s fourth-largest carrier."

In March 2012, a new development proposal for the airport came forth with the announcement of a fresh Master Plan. The Master Plan envisages phased development of the airport over the next 15 years to transform it into "London’s Local Airport" and increase annual passenger capacity to 15-16 million by 2028.

The initial phase of development of the proposal includes improvement of transport links with the capital, construction of a new pier, new aircraft stands, extension of the taxiway, and upgrade of the existing aircraft stands.

Public consultation regarding the expansion is underway. As of January 2013, 65% of the respondents supported the proposal considering the potential economic benefits to the region.