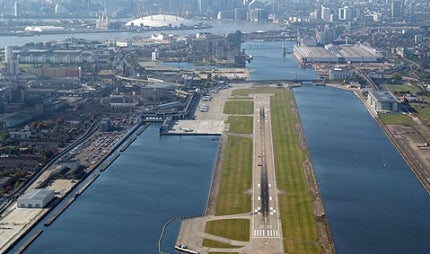 London City Airport is located in the Royal Docks area of London, principally serving the financial district. It is owned by Global Infrastructure Partners (GIP) and Highstar Capital (Highstar).

"3.03 million passengers travelled through the airport in 2012."

The airport opened to the public in October 1986. With good accessibility and fast check-in times, it attracts a greater number of business travellers than any other airport in London. It connects over 40 destinations in the UK, Europe and the US. A total of 3.03 million passengers travelled through the airport in 2012. Total aircraft movements until November 2012 reached 65,703.

In 2012, the airport was named as the best airport at the Airport Council International Europe Awards.

The airport’s 2006 master plan outlines the growth and developments that will take place at London City Airport up to 2030.

The master plan forecasts that the airport will accommodate eight million passengers by 2030.

The construction of four new aircraft parking stands and a pier, and the expansion of the departure lounge, were completed in May 2008.

Evolving from an airfield developed as a World War II US bomber base, Stansted Airport takes its name from nearby Stansted Mountfitchet in Essex.

Enhancement work worth £7m at the terminal was completed in February 2011. The departure lounge and security search area were expanded as part of the work. Another project worth £8m upgraded the security and passenger area during the same year.

The terminal enhancement contract was awarded to AA Lovegrove and the project was managed by Atkins Design and Engineering.

In November 2012, the airport announced a £15m investment plan which includes the refurbishment of the western piers along with the addition of new departure gates, enhancement of lounge facilities, improvement to baggage handling areas and renovation of the international arrivals hall. Related works are expected to commence in early 2013.

The airport is planning to undertake the City Airport Development Programme (CADP). The programme is aimed at improving the infrastructure at the airport. It will enable the existing facilities to be modernised without the need for building a new runway or expanding the existing runway.

A planning application is expected to be submitted to the London Borough of Newham in 2013. The proposal will include extension of the terminal building, aircraft stands and piers, taxi lane, entrance and food court renovation. New facilities such as commercial offices, hotel, fire stations, baggage stations, and emergency access points are also part of the programme. If approved, the CADP is expected to be completed in 2016.

The passenger terminal at the airport was opened in 1987. It features check-in facilities, ticket counters, security, a departure lounge, a departure and arrival pier, departure gate areas, domestic and international baggage reclaim areas, immigration and customs, shops, a business centre and food outlets. The enhanced terminal features an enlarged passenger search area and additional space in the departure lounge.

"If approved, the CADP is expected to be completed in 2016."

The departure lounge located on the first floor offers seating for 326 passengers. The west side of the terminal building accommodates a baggage reclaim area, immigration facilities and accommodation for control authorities and handling agents. Departure gate lounges on the ground floor accommodate 50 passengers each. The compact structure of the terminal allows shorter check-in and boarding times in comparison with other airports.

London City Airport has a single runway strip. The runway measures 1,199m in length and is made of concrete. There is no parallel taxiway serving the runway. The runway can handle aircraft up to the size of a BAe 146 regional jet. A holding point for three aircraft is provided at the eastern end of the runway to improve the efficiency of the runway during peak hours.

The air traffic control (ATC) tower at the airport is located on the north-east side of the terminal building. The tower is operated by National Air Traffic Services (NATS). It uses the electronic flight progress strip (EFPS) system developed by NAV CANADA. The EFPS enables the operators to efficiently handle the complex air traffic control operations.

"London City Airport attracts a greater number of business travellers than any other airport in London."

The ground transportation infrastructure at the airport includes DLR link and station, road link, bus pick-up and drop-off areas, taxi rank and car hire facilities. The DLR station is connected to the terminal through an enclosed walkway. Light rail is available at eight to 15-minute intervals.

Transport for London operates bus services to and from the airport. Bus pick-up and drop-off points are located in front of the terminal. Passengers can also reserve a shuttle bus service and an executive ride share service, which runs between Central London and the airport. A taxi rank and hire car services are also available in front of the terminal.