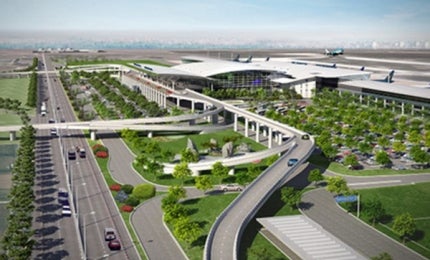 The airport will be built on 5,000ha of land and will be designed to have an annual capacity of more than 100 million passengers. It will be capable of handling large and modern aircraft such as A380 and five million tonnes of cargo a year. The construction is scheduled to start in 2017 and is expected to be fully completed by 2035.

Approximately 10,000 people from the six communes of Long Thanh province will be displaced for the construction.

The proposed airport has the potential to become a major transport hub and an important entry point to Indochina region in south-east Asia and surrounding ASEAN countries. It is being promoted as ‘Vietnam’s Global Gateway City’ by the Vietnamese Government.

The new airport is expected to serve 90% of international and 20% of domestic flights of Vietnam, reducing overburden on the Tan Son Nhat International Airport.

"The proposed airport has the potential to become a major transport hub and an important entry point to Indochina region in south-east Asia and surrounding ASEAN countries."

The total investment on the new airport is estimated to be $18.7bn. The project will be developed in three phases. The first phase will cost the government approximately $7.8bn, whereas the second and third phases are estimated to cost $3.8bn and $7bn respectively.

The master plan for new airport was prepared by ADPi on behalf of JAC (Japan Airports Consultants). ADPi is also responsible for architectural concepts for the four main buildings of the first phase, consisting of the passenger terminal building, air traffic control tower, aircraft rescue and firefighting station, and the airport authority offices.

The Vietnamese Prime Minister approved for project in June 2011. Construction works under the Phase I will be completed over two phases, Phase 1A and Phase 1B. Phase 1A will see the construction of the main terminal and one runway by 2023, allowing the airport to initially serve 17 million passengers a year.

Phase 1B will see the completion of two wings of the main terminal and the second runway by 2025. Additional infrastructural facilities to be built in this phase include taxiways, parking area, operation management area, air traffic management area, auxiliary area, a passenger terminal with a capacity of 25 million passengers a year and a cargo terminal with an annual capacity of 1.2 million tonnes a year.

The number of runways will increase to three in the second phase, which will be completed by 2030. The airport’s capacity will also be doubled to 50 million passengers and 1.5 million tonnes of cargo a year.

In the third phase, the passenger capacity will reach 100 million a year with four terminals functioning by 2035.

The government has also planned for the construction and upgradation of road and rail routes to connect the new terminals for convenient travel. The roads connecting Ho Chi Minh City to Long Thanh and Vung Tau to Bien Hoa will be completed by 2020.The express train route connecting Nha Trang and Ho Chi Minh City is expected to be completed by 2030.