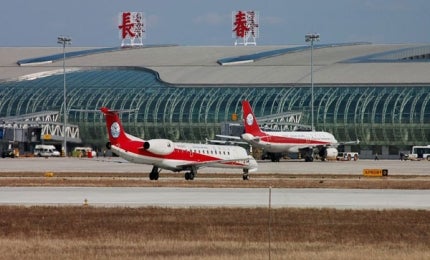 The Chinese airport was jointly built by the General Administration of Civil Aviation of China and Jilin Province. It started operations in 2005 and offers both domestic and international services to destinations, including Beijing, Shanghai, Guangzhou, Hong Kong, Seoul, Tokyo and Sendai. In 2008, it handled 3.6 million passengers and carried 25,000t of freight.

"Further expansion plans are in place to increase its designed passenger handling capacity to 6.5 million passengers a year by the end of 2015."

Terminal one of the airport has seven boarding bridges for both arrival and departure and covers an area of 40,000m². The airport currently offers 100 domestic routes and more than 20 routes for Hong Kong, Macau, Taiwan and other countries. The flight zone grade of the airport was upgraded in 2011 from 4D to 4E, allowing large wide-body aircraft to take-off and land.

Passenger facilities at the terminal include first-class lounges, post office, smoking rooms, duty-free shops, pubs, restaurants, money exchange services, lounge for mothers and babies, recreation room, specially-built elevators for handicapped and Wi-Fi throughout the terminal. In addition to a wheelchair lift, a medical care centre and a baggage locker station are located near the entrance to domestic and international lines.

Runways and other facilities at the airport

The airport has a single runway measuring 3,200m long and 45m wide. There is a taxiway, which runs parallel to the runway. A total of 13 aprons, including eight near the station site, are present at the airport.

The Guilin Liangjiang International Airport is located south-west of Guilin, about 28km away from downtown Guilin, Guangxi, in China.

HASSEL Studio proposed a design for the new terminal planned to be constructed with a built-up area of 120,000m². The design is inspired by the native rose species of Changchun. The rose-shaped terminal will offer enough space for passenger flow and areas around the airport.

There will be an internal garden close to the entrance, which will display greenery throughout the year. The entrance will also feature a drape-style roof surface and serve as lamp that draws light into the terminal. The entrance area will also have skylights augmented with integrated artificial lighting, which will glow all times of the day. The design enables further expansion of the terminal based on the city’s requirements.

The completion of Terminal 2 is expected to increase the number of international flight routes from the terminal to 70.