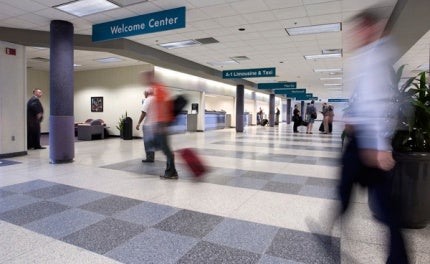 Fort Wayne International Airport is a public airport that serves the city of Fort Wayne, Indiana, USA. The airport is located eight miles south-west of Fort Wayne City. Spread over an area of 3,700 acres, it has four major airlines: Allegiant, Delta, American and United.

The airport is owned and operated by the Fort Wayne-Allen County Airport Authority (FWACAA). It handled 5.44 million passengers and 29.69 million pounds of cargo in 2013.

The Fort Wayne International Airport was built in 1941 with an investment of $10m. It served as a military base during World War II and was originally known as Baer Field. Post-war, the airport was sold to the city of Fort Wayne for $1 by the Federal government.

In 1946, the city changed the airport’s name to Fort Wayne Municipal Airport. It was renamed again in 1985 as Fort Wayne International Airport by the Airport Authority.

The airport has undergone numerous expansions and improvement plans, including the expansion of the terminal and parking areas, runway upgrades and the construction of a new air trade centre.

The FWACAA launched an airport master plan and airport layout plan (ALP) update in late 2009. The master plan update aims to evaluate all of the airport components such as the airfield, cargo facilities and terminal area, and develop concepts to meet the anticipated aviation demand. It also includes a capital improvement plan (CIP) to identify the projects necessary to accommodate the forecast aviation demand.

San Antonio International Airport is on a 1,200-acre site situated just north of the city near the north-east corner of the I-410/US 281 intersection.

Phase III expansion, which is the longest among the three phases, is scheduled to be completed in the 11-20 year time frame. It will include baggage claim expansion (phase II), taxiway C shoulder improvements, taxiway B extension, upper level boarding gate expansion, terminal access road improvements and terminal parking lot improvements.

The FWACAA awarded a contract to the Hagerman Group in July 2014 to design and construct a new fixed-base operator (FBO) facility. The FBO, to be constructed on the west side of the airport, will replace the existing FBO terminal on the north side. The new terminal will serve as a point of enplanement or deplanement for passengers and as an area for private pilot rest, in addition to housing space for lease.

"In September 2013, the FWACAA received a federal airport improvement grant worth $2.74m from the Federal Aviation Administration."

In September 2013, the FWACAA received a federal airport improvement grant worth $2.74m from the Federal Aviation Administration. The grant is meant for improving access to the general aviation portion of the airport, which includes a new access road on the west side of the airfield.

The airport has a single passenger terminal building called Lieutenant Paul Bear Terminal, which opened in 1951. The terminal was expanded and improved in 1996 and 2013.

The Lt. Paul Bear Terminal has eight gates. Gates 1-4 are on the first floor of the building and gates 5-8 are located on the second. The terminal features a baggage counter, elevators, escalators, security check, free wireless internet, a business centre, children’s play areas, restaurants, coffee shops and gift shops.

Fort Wayne International Airport has three runways. Runway 5/23, which is 11,981ft long and 150m wide, is one of the longest runways in the US. The runway can handle aircraft of any size, including A380s, 747s, space shuttles and military tankers.

The airport has a parking facility with long-term, short-term and economy parking lots for the convenience of passengers.