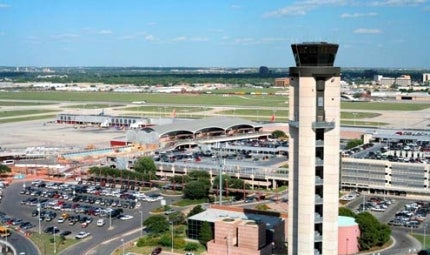 San Antonio International Airport is on a 1,200-acre site situated just north of the city near the northeast corner of the I-410/US 281 intersection (roads are also undergoing improvement).

The airport handled 8.3 million domestic and international passengers and 14,469 aircraft movements in 2013. The airport is in the midst of an important expansion project (from the second master plan developed in 1994), which will see new terminal buildings and also new car park facilities.

"The airport handled 8.3 million domestic and international passengers and 14,469 aircraft movements in 2013."

At the airport there are two terminals with 24 jet-bridge gates (three rarely-used ground-loading gates).

The original terminal (terminal 2), which was opened in 1953 and has been expanded a number of times, has east and west wings and an eight-gate satellite concourse.

The airport’s long-term master plan, Vision 2050, was approved by the city council in March 2011. The master plan includes forecasts of aviation demand, a three-phased implementation plan, cost estimates, a financial plan and an analysis of the environmental impacts of future development. The project is estimated to cost around $191m for short-term improvements.

William P. Hobby Airport is one of three airports serving Houston, Texas, in the US.

The short-term improvements include renovation of terminal A, a new six-storey car rental facility, acquisition of land outside the airport property for additional parking spaces, and reservation of on-site parcels for development of aviation, aircraft maintenance and manufacturing facilities.

The plan also includes additional funds of $815m for capital projects implemented over 20 years. The projects include control of runway protection zones, expansion of the runway (12L-30R) from a general runway to an air carrier runway, expansion of Terminal A, building a new terminal C and preserving land for further expansion in future.

A new two-level eight-gate concourse was completed in 2008 and opened in November 2010. Terminal two is currently being demolished. Due to the close proximity of terminal B the demolition activity is being carried out with preventive measures. The demolished terminal will be replaced by terminal C.

Terminal one has been renamed as terminal A, and the newly constructed concourse is called terminal B (204,000ft²).

Renovation of Terminal A was started in October 2012 and extended for 18 months. The project included the renovation of 12 public rest rooms and visitor waiting rooms, addition of new flooring in the gates, new finishes to walls and ceiling, interior lighting, installation of six new escalators and refurbishment of five old escalators, installation of new HVAC units and digital controls, extension of fire sprinkler system, and addition of new furniture and fixtures.

The new terminal C (176,000ft² – due for completion in 2015) will be constructed to the west of terminal two. It will have five gates and will then later be expanded to 11 gates. The total number of jet bridges at the airport will be 28 after the first phase of terminal C but will eventually be 35 gates.

In addition to the terminal construction work the two-level road in front of terminal one will be expanded for the extra capacity of the new terminal B and terminal C.

A joint venture of Bartlett Cocke Contractors, Walbridge and HNTB Corporation was the contractor responsible for the design and construction of the parking garage completed in January 2008.

In addition a $6.4m contract was awarded to the Yantis Company in 2006 for construction of the first of three phases of the Airside Apron and Utilities Project in support of the terminals B and C expansion project.

Bishop International Airport is located in the city of Flint in Michigan, US.

The first phase included demolition of existing aircraft ramp pavements and utilities between existing terminals one and two, and the reconstruction of ramp and utilities to accommodate terminal B. The terminal two reconstruction and demolition contract was awarded to Constructors and Associates, Inc ($2.8m). The project involved reconfiguring ticketing and baggage claim lobbies and relocation of TSA screening equipment and airline tenants within the terminal.

SpawGlass Contractors, in collaboration with Reynolds, Smith, and Hills, was responsible for the renovation work of the Terminal A building.

In December 2007 a runway extension at San Antonio was approved by the FAA (Federal Aviation Authority).

The same agreement (an environmental Finding Of No Significant Impact (FONSI)) from the FAA allowed the lease of a 54-acre site at the airport for commercial development.