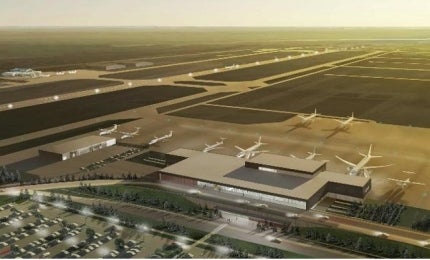 Construction of the airport’s new passenger terminal started in August 2011 and opened in June 2014. The new terminal is located on a greenfield site south of the existing terminal and was one of the 11 recipients of the 2013 Canadian Architect Awards of Excellence.

The terminal covers an area of 15,000m² and was constructed with a $258m investment, $25m of which was funded by the regional municipality of Wood Buffalo. It is designed to handle 1.5 million passengers a year.

The airport covers a total land area of 5.12km² and has a passenger terminal named North Terminal, which was opened in 1986 with an annual passenger handling capacity of 25,000. The North Terminal will be used to serve charter flights.

“The new terminal was one of the 11 recipients of the 2013 Canadian Architect Awards of Excellence.”

The airport’s existing 2,286m-long runway was extended in 2007 and the traffic control tower was commissioned in 1981.

The expansion plans started following the transfer of the airport’s ownership and operations from the regional municipality of Wood Buffalo to FMAA in January 2010. A second baggage area, west of the North Terminal, was completed in December 2012 to facilitate baggage handling services prior to the opening of the new terminal.

The new terminal project formed the part of the airport’s expansion and redevelopment project, which involved the construction of additional parking areas, apron and taxiways, a new access road from Highway 69.

The construction of four aircraft bridges, eight aircraft parking stands and the powered parking area with more than 2,200 spaces was completed as of May.

Design, construction and facilities of the new terminal

The three-level terminal building is designed to blend with the natural landscape. The Northern Lights Wall in the entry and arrivals hall is a major highlight, complementing the Northern Lights (aurora borealis) and the Boreal Forest.

Savannah/Hilton Head International Airport is the second busiest airport in Georgia after the Hartsfield-Jackson Atlanta Airport.

The exterior of the terminal is fitted with 179 pre-weathered steel panels and 125 precast panels, the interior is laden with 25,020ft² of carpet and the roof structure features 1.4 million pounds of cross-laminated timber (CLT) panels.

Other construction materials used include stone and glass. The building is provided with terrazzo flooring and the interiors are decorated with paintings and sculptures by renowned Canadian artists.

The top floor of the terminal comprises an observation area and a children’s play area. The terminal is Wi-Fi accessible throughout and provides a barrier-free access to people with disabilities.

The project management services for the terminal project were provided by Stantec, while the design was provided by mcfarlane biggar architects + designers and the construction works were carried out by Ledcor.