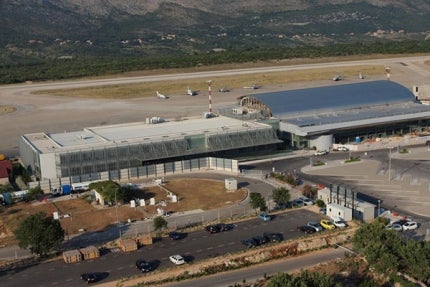 The airport handled 1.48 million passengers and witnessed more than 16,216 aircraft movements in 2012, while handling 357t of cargo.

"The airport handled 1.48 million passengers and witnessed more than 16,216 aircraft movements in 2012."

Bids for the construction of a new passenger terminal at the airport were invited in September 2012. Construction is expected to begin in August 2013 and will be finished by the end of 2015.

The new terminal will have a floor space of 36,500m² (392,883ft²). It will include construction of four jet bridges, an extensive commercial zone, and a large four-star airport hotel, as well as a new runway and conversion of the existing runway into a taxiway. The new terminal will accommodate around 3.5 million passengers a year.

The estimated investment for the construction of the terminal is €220m ($284.64m). The project will receive EU finding.

The terminal will undergo further expansion after 2015.

Zagreb Airport, which is situated in the suburb of Pleso in Croatia, is the country’s main international airport and also an important military base for fighter jets. The airport, which is the primary hub for Croatia Airlines, is located only 10km from the centre of Zagreb and in 2008 handled over two million passengers (2,192,453). Currently annual passenger growth is a buoyant 14% year on year and an expansion project is underway.

Terminal B is intended for passenger arrivals and departures. It has the capacity to handle around two million passengers a year. It features all the typical facilities such as shops, waiting rooms, Wi-Fi internet, business lounge, restaurants, cafes, currency exchange, ATMs and a bank.

The terminal also has eight gates, 18 aircraft stands and four baggage claim belts, while there are also business and VIP lounges, and separate facilities for disabled access.

The contract for the installation of baggage handling systems at the departure area in the airport was awarded to SRK Baggage Handling Systems.

The airport has one cargo terminal with a capacity to handle 10,000t of cargo. The warehouse capacity is 300m² (3,229ft²). The cargo facilities also include heated storage, x-ray equipment and mechanical handling.

The fixed-base operations at the airport are carried by Apogee Operations and Euro Jet.

"The terminal will undergo further expansion after 2015."

The airport has taxi and car hire services available. The car rental companies at the airport include Avis, Budget, Dollar, Hertz and Sixt, as well as local operators. The Dubrovnik city bus station is also located near the airport.

There is a car parking located next to the passenger terminal, which has over 200 car parking spaces.