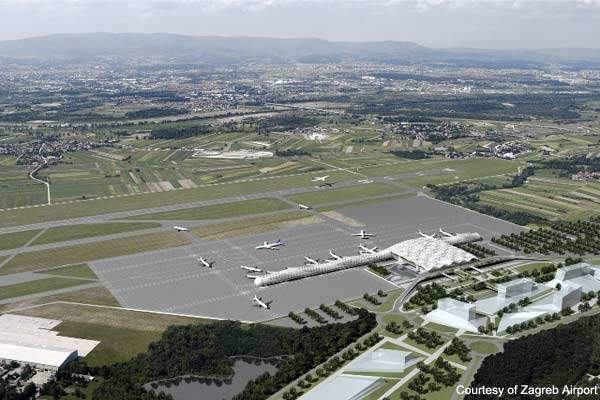 Zagreb Airport has enjoyed unprecedented success over that last few years with growth of 14&#37; a year. 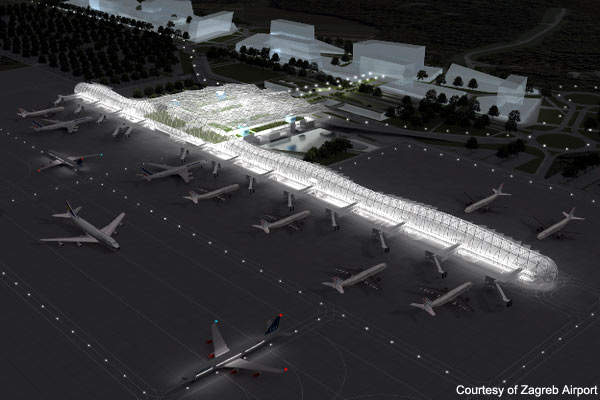 The Pleso terminal will use as many energy-saving and sustainable features as possible in its construction. 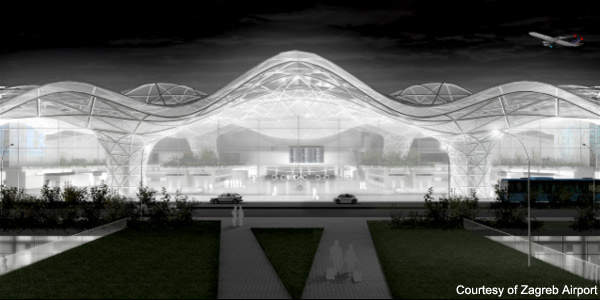 The new Zagreb Airport terminal design was chosen by an international competition by a jury of nine from 16 other projects. 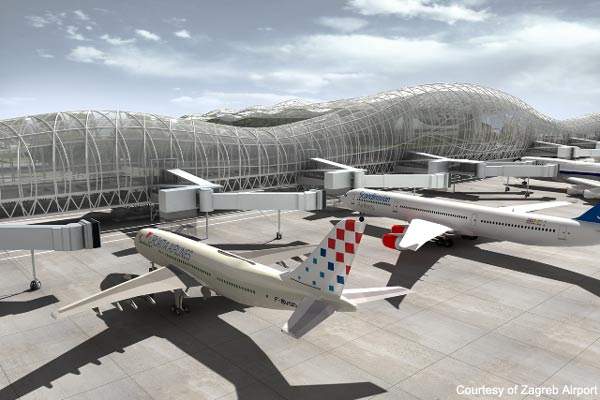 The new terminal will have a nominal capacity of 3.3 million passengers a year.

Zagreb Airport, which is situated in the suburb of Pleso in Croatia, is the country’s main international airport and also an important military base for fighter jets. The airport, which is the primary hub for Croatia Airlines, is located only 10km from the centre of Zagreb and in 2008 handled over two million passengers (2,192,453). Currently annual passenger growth is a buoyant 14% year on year and an expansion project is underway.

“Zagreb Airport is the country’s main international airport and an important military base for fighter jets.”

With growing passenger numbers the old terminal facilities cannot handle the additional volume and are in desperate need of upgrading. To this end a new terminal building is now planned, to be opened in 2011.

Several master plans have been put forward with an increase in capacity as their priority, but the latest developed by Scott Associates in 2006 expects the new terminal to have 12 airbridges and an annual capacity of 3.3 million passengers (typical peak hour volume is expected to be 1,804 passengers an hour).

The terminal will have around 65,600m² of floor space – nearly five times greater than the size of the current terminal. The new terminal has been designed as a result of an international architectural and urban planning competition, which was finally won by a consortium of between IGH dd (Civil Engineering Institute of Croatia), Neidhardt arhitekti Ltd and Kincl Ltd chosen from 17 other proposals. This was decided by a nine-member jury lead by architect Jerko Rosin and announced on 1 October 2008. The design includes a retail area that will have banks, shops, cafes and restaurants, a luxury hotel with a direct underground link to the terminal and a railway station.

The new terminal has been designed with glass walls (low-E energy-efficient glass) to allow natural light into the building but repel heat and there will also be a wave-form façade for the roof (will also collect rainwater for reuse as grey water, with a 640,000m² surface area). The new passenger terminal is expected to cost between €280m to €300m ($390m-$418m) and should be completed by the end of 2012 if construction begins in 2009 as planned.

The new terminal could put Zagreb into a position as a major entry point into South-Eastern Europe. Following this, the old terminal will be refurbished and used for low-cost airline operators. The other major piece of intended infrastructure for the airport will be a second parallel runway (the timescale for the completion is as yet unknown).

Other integrated transport infrastructure will accompany the updated airport terminal including a new rail line alongside the Velika Gorica Eastern bypass and upgraded road infrastructure.

Alongside the new terminal there is also an intention to build the ‘Air City’ complex (a business / commercial complex) on 500m² (50ha) which will be connected to Velika Gorica and Zagreb. The development will also have space for 2,000 cars in a multi-storey car park (may be one or two buildings but must not cover more than 10,000m² in total).

The terminal will have 16 gates each with a floor area of 101m² and there will also be ten lounges each occupying 218m² and two double-sized (436m²) lounges for A380 use (three adjacent gates will be able to use one lounge).