As airports slowly begin a return to regular service as national Covid-19 measures lessen and international safe travel country lists are drawn up, airports have been implementing various Covid-19 testing methods to mitigate the spread of the virus.

Complementing the likes of temperature checks and enforced Covid-19 testing, a new method is being trialled to identify passengers who test positive for the virus; the use of medical detection dogs. A canine screening trial recently took place with six dogs trained by charity Medical Detection Dogs to recognise the smell which is produced by people with Covid-19.

During the trial the dogs were able to correctly identify 88% of Covid-19 cases; however they also incorrectly flagged 16% of people who tested negative. The research is at an early stage which could see these false positives figures improving over time.

We speak to Prof James Logan from the London School of Hygiene and Tropical Medicine to find out more about the trial and the potential future use of Covid-19 sniffer dogs in the airport environment.

Frankie Youd (FY): What was your involvement with the trail and how did the idea come about to use dogs?

James Logan (JL): I led the study, I had oversight over the whole thing. I set up the collaboration with Medical Detection Dogs, the charity. We built on work that we had previously done on malaria, where we demonstrated that malaria has a specific odour and that medical detection dogs can be trained to detect the odour of malaria.

When Covid-19 happened, I got in contact with the same team who I’d worked with before and said, “How about we do this with Covid-19?” That’s where it all started.

FY: Could you provide some background on the trial and how it was carried out?

JL: A really big part of the trial was collecting samples from people. We got over 3,500 participants involved and they donated their odour samples. They wore socks, a t-shirt and a face mask, which they then sent to us. They were tested by PCR so that we knew if they were positive or negative, and then the dogs went through different phases of training.

They started with a small number of samples where we look to see if Covid-19 had a smell and whether the dogs were detecting anything. It was very clear quickly that there was a smell. 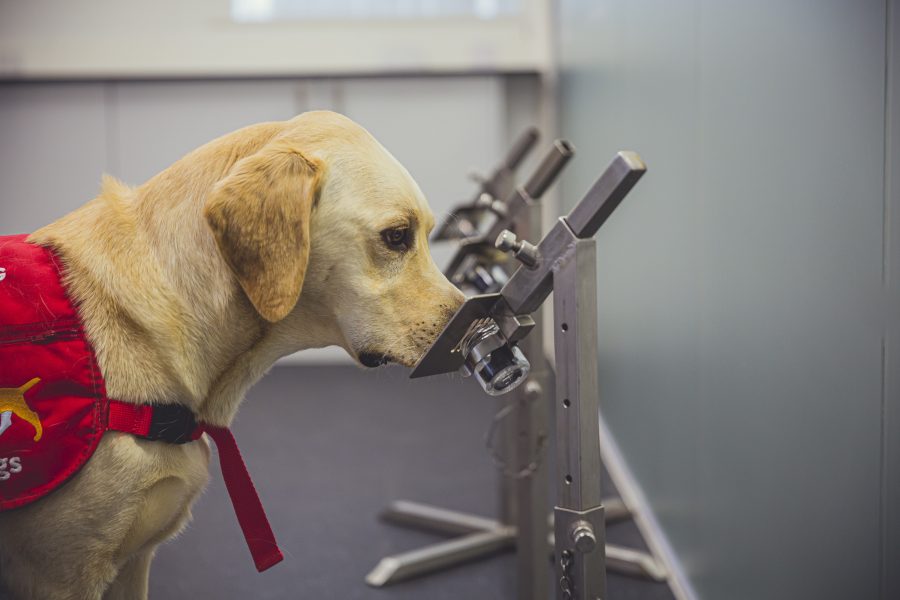 It’s really important for them to be exposed to both because you want them to learn to ignore anything that’s background noise. That could be the smell of a hospital where some of the samples came from, or it could be the smell of somebody’s home or maybe they have another illness, so it’s making sure that they ignore that and just focus on the Covid-19 odour.

FY: Where did the samples come from? Were different variants presented?

JL: We had a mix of people; people with heavy symptoms, they were in hospital but not on a ventilator. We had people who were mild, which meant they didn’t have a cough, but they had a headache, or they had a sore throat or other symptoms. Then we had people without any symptoms whatsoever.

We tested what’s now being referred to as the alpha variant, the original variant from last year, for the majority of samples, but towards the end of the study, we did have samples from what was called the Kent variant. We had two different variants in there and the dogs that had been trained on one variant still detected the other one. We haven’t tested on the Delta variant, the Indian one, but we’ve got no reason to believe that they wouldn’t detect that as well.

FY: What are the benefits of using dogs to detect Covid-19?

JL: One is accuracy; we have a good level of accuracy for people who have a low viral load. With lateral flow tests, you find that the efficiency drops off very quickly as the viral load decreases. If you’re at the early stage of infection, or you’re asymptomatic, a lateral flow test isn’t going to pick that up very well; a PCR test won’t pick it up. But even at very, very low amounts of virus, the dog is still picking up the virus, which is incredible.

“The real key to this is speed. Each individual dog could screen up to 300 people per hour.”

But the real key to this is speed. Each individual dog could screen up to 300 people per hour. We’ve been to Heathrow Airport, we talked to border force, we’ve seen dogs in action that screen for drugs and explosives, there’s already a precedent there, dogs are used in that environment already in the same way we would screen people for Covid-19.

If you imagine people getting off a plane as they disembark, they would walk past two dogs, those two dogs screen a plane full of 300 people in the time it takes those people to get off the plane. No additional queuing or testing needs to be done. 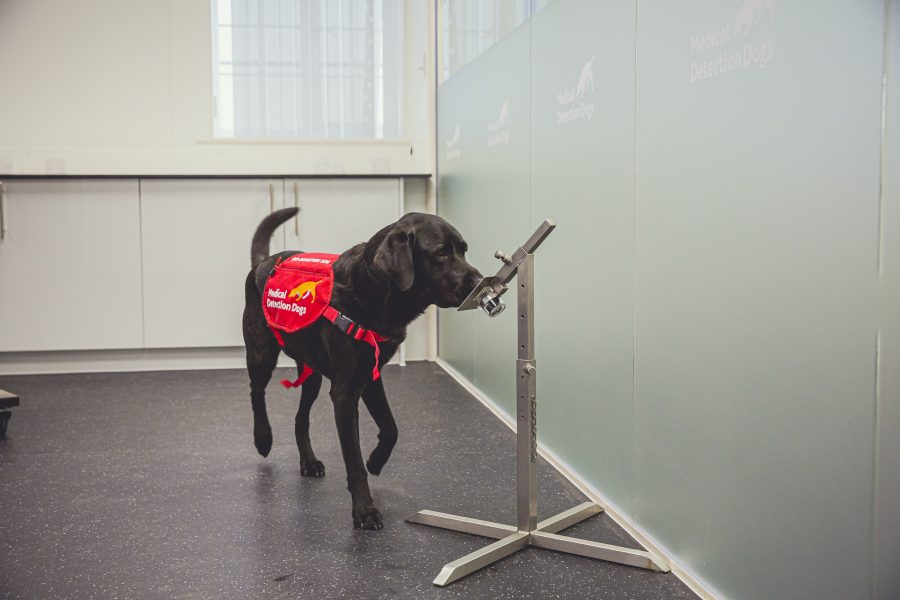 In that scenario, some of those people will test positive and those people would be asked to step aside and then they’d either be quarantined, or they would have a PCR test. Rather than what we’re seeing now, which is an entire plane of people going into quarantine, the majority of that is unnecessary because the majority of people are not infected. With dogs, you would have a smaller sample of people that would go in through that process, and most people would leave and go home.

Cost-wise as well, people are paying a lot of money for tests but to be screened by a dog you’d be talking about pennies, less than a pound per person.

FY: What challenges present themselves when using dogs?

JL: The biggest challenge is the mode of deployment and scale up. We’ve got to think about how many dogs we need to have an impact at an airport, this is something that we’re working on now.

Is it feasible? Yes, but we need to figure out the challenge of getting enough dogs. We certainly wouldn’t be seeing a dog at every airport for every flight, that’s not feasible. What we need to do next is figure out how we can use it in the smartest way possible. If we can have a dog at the gate for any high-risk flights that are coming in for example, or it might be those flights have to be quarantined and the dogs are better used for amber countries where there’s a medium-risk.

That’s what we’re discussing with the government and with airports in terms of how that might work. So that’s the biggest challenge, but we think that it is something that we can overcome.

FY: Are there plans for further testing on humans?

JL: We are in discussions with the UK government at the moment. Lots of discussing with airports and airlines to find out what the next steps will be. The next phase of the research is to get the dogs into the real world.

We have now around 20 dogs that are being trained for that purpose. Instead of samples in a pot which is how the phase one work was done, they’ll be trained on t-shirts that are being worn by real people as they’re walking past the dogs and they’re doing well on that. 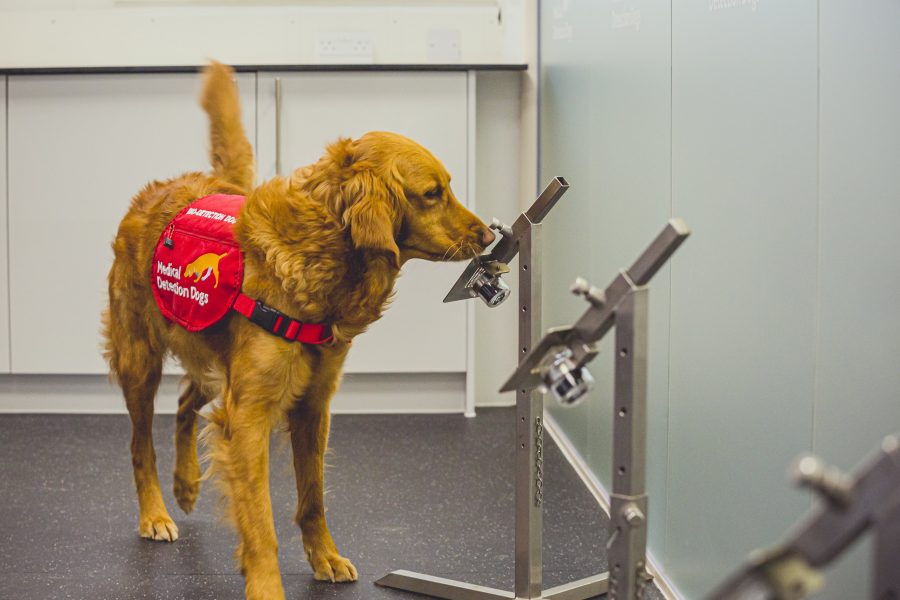 The next stage is to do it with people who are actually infected. We don’t think there’s any reason to believe that it will be any different so we’re very hopeful.

FY: Do you think the use of dogs could assist future Covid-19 screening at airports?

JL: Yes, it’s not replacing anything, it’s not going to replace clinical testing, it has to be viewed very much as a screen. So rather than calling it a diagnostic test, we call it a public health tool.

“I would like to see this in place at points of entry because I think dogs could solve a lot of the problems that we’ve got, I think there’s a real opportunity there.”

I would like to see this in place at points of entry because I think dogs could solve a lot of the problems that we’ve got, I think there’s a real opportunity there. Going forward I would love to see dogs having a role to help this pandemic. It’s not going anywhere, it’s certainly not going to be gone within six months, a year – we’ll probably be living with Covid-19 now and forever in various ways and having vaccination programmes.

We need to think about the long term as well. Even though there might be logistical challenges in terms of getting lots of dogs out there, we’ve got quite a long time to get dogs out there eventually. And not just for this one, but for the next one, we have to be prepared for that. One way to do that is to have something like dogs that are able to be trained quickly and deployed quickly. As part of our preparedness for the next one, we could have dogs that are ready to go.

@LinkedIn
Frankie Youd is the senior transport features writer for Ship Technology, Railway Technology and Airport Technology. She has a background in Journalism with a BA Hons degree from The University of Sussex.
SUBSCRIBED