In much the same way as supermarkets have started to introduce technology for customers to scan and pay for their shopping, airports are now finding that the self-service kiosk is a valuable tool in the reduction of queues.

The use of new technology, such as internet e-check-in and self-service kiosks, allows the processing of a significant number of passengers to be decentralised from the airport itself. This allows a better use of airport staff resources and reduces bottlenecks while, more significantly, allowing more departing passengers to be processed.

“Airports are now finding that the self-service kiosk is a valuable tool in the reduction of queues.”

But while the kiosk technology has been around for some time, it has still taken the industry a lot of coaxing to make passengers comfortable with the technology.

Frequent flyers and business flyers who tend to travel with little luggage and appreciate any time-saving measures are currently leading the way in self-service check-in use. And with the rise of self-service kiosks in hotels, supermarkets and other places around the world, your every-day passenger, it is hoped, will also follow their lead.

Self-service check-in kiosks first began to be installed about ten years ago in the US and five years ago in the EU, but these were airline specific. These are still used but the latest incarnation of these kiosks is the ‘common user self-service’ (CUSS) terminal.

CUSS terminals were developed when a group of airlines approached the International Air Transport Association (IATA) to suggest that a common standard for terminals should be developed instead of each company providing its own terminals. In 1998 at the ATA / IATA Joint Passenger Services Conference (JPSC) a working group was set up to develop the idea.

CUSS was designed to enable airlines to provide a range of passenger facilities at a shared kiosk. In 2005, CUSS kiosks began to be deployed across airports worldwide in significant numbers. Now in a similar fashion to the way people had to get used to the first ATM (automatic teller machines) at banks, the airlines and airports are required to nurture passenger acceptance.

CUSS KIOSKS – THE CHALLENGES BEFORE TAKE OFF 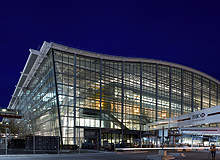 In July 2006, Newcastle International Airport in the UK completed an initial trial of ten CUSS kiosks and gained an overall positive impression of the system. IT support manager at Newcastle International, Darren Kelly, was involved with the project from day one and was able to gain some idea of how passengers react to such a new technology.

“Frequent flyers and business flyers who tend to travel with little luggage and appreciate any time-saving measures.”

“The initial trial was with KLM. They are a world leading airline in the implementation of CUSS technology; we worked with KLM’s handling agent, SwissPort, to implement the project. SITA, ARINC and IER supplied the kiosks,” Kelly says. “The project started off very well but over the first couple of months the novelty wore off. As with all new technology it takes some hammering home to people before they realise the benefits.”

Over the course of the trial, which lasted six months, the airport found that the number of passengers using the kiosks began to drop.

“We had to talk to SwissPort and KLM and work with them to understand what the problems were and what we could do to make the project a success.

“One of the biggest issues was the one of ‘hosting’; instead of having the traditional check-in desk we had four to five staff (check-in agents) floor walking, assisting passengers in the use of the kiosks to raise their profile.” But was this rise in human resources more beneficial than having more services check-in counters open?

“With the right resources the system works very well,” Kelly says, adding that the airport’s CUSS system was continued after the trial – today the airport has an additional four kiosks and also two additional airlines, Air France and Fly Be, have joined the platform.

“One of the advantages at Newcastle is that all of these airlines are supported by SwissPort – at larger airports there may be more than one handling agent and the situation for CUSS might get a little more complex for stock replenishment, printer replenishment and routine maintenance for the kiosks.”

THE IMPORTANCE OF A PRESENCE

The system works well when it is hosted, it’s just a case of people getting used to it, according to Kelly. “It all depends upon the passenger profile,” Kelly says. “Business passengers and frequent flyers seem to be a lot more open to the use of kiosks but once-a-year vacation flyers and those flying with a lot of luggage and large families will be more wary.”

“Self-check-in kiosks were first installed about ten years ago in the US and five in the EU.”

“Of course it’s easier if the passenger has only hand luggage although the baggage drops provided work very efficiently and all the passenger has to do is present the luggage (security questions are asked by the kiosk and are not duplicated by the agents) and have the luggage weighed and tagged and they can move quickly to the airside (luggage drops are a potential bottleneck).”

Kelly himself has helped host the kiosks. He says one Chinese family checking in to fly to Shanghai using KLM required help with passport barcodes that required scanning, visa details that needed checking and then four different boarding cards that had to be printed off. “Everything worked fine,” he says.

But today one problem still remains. UK self-service kiosks are not allowed to print out luggage tags; this has not been approved by the Department for Transport (DfT) even though the technology is there to actually do this.

Stephen Challis, head of product development for BAA, manages seven airports across the UK including Heathrow, Gatwick, Stansted, Glasgow and Edinburgh. BAA has introduced CUSS kiosks across all ITSR airports in an attempt to increase the efficiency of the check-in process.

“[We found] very quickly that the kiosks filled a critical function in increasing the number of check-in points for passengers – obviously this is a very important factor at larger airports such as Heathrow,” Challis says.

“If the passenger has no luggage to check-in then the process of checking in takes around one minute; they have to prove identity by using a passport barcode (scanned), credit card, frequent flyer card or transaction number, and then there are about four touch screens to go through. If they do have luggage the luggage drops are manned and simply reconcile the passenger with each piece of luggage and so the process is still relatively rapid.”

THE FUTURE FOR AIRPORT SELF SERVICE

The new terminal five at Heathrow will have around 100 CUSS terminals. “Of course the kiosks have to be dispersed around the terminal in the natural flow so that people will find them and use them. The great thing about kiosks of course is that they can be monitored and redeployed to a different location if they are not being used.”

“If the passenger has no luggage to check-in then the process of checking in takes around one minute.”

Dennis Brazzolotto is the product manager of self-service kiosks for IER in France, one of the largest producers of CUSS terminals in the world. “We have had more and more orders for self-service CUSS terminals from airports all around the world – the response has been huge,” he says.

“The self-service terminals we provide are of IATA specification and use the common software system developed for this purpose.

“We also offer a remote monitoring service from our control centre in Paris which can tell airports and agents if a kiosk needs to be replenished or if it breaks down [and] in larger airports we have maintenance technicians on-site to provide repairs.”

“The technology has developed a long way in the last few years using html and JAVA. Self-service kiosks are going to revolutionise the way airports work – in fact they may even relieve the need for some terminal expansions.

“We are constantly improving the kiosks to keep up with new advances (such as e-passports). The newer 918 model recently introduced at San Francisco International Airport will include larger 17in touch screens, 2D barcode reader, wireless connectivity, integrated full-page passport reader with radio frequency passport reading capability and a fingerprint reader.”

In the future kiosks will also be able to handle biometric passports as they will be equipped with a radio frequency identification reader, and one of the newest ideas from IER is to convert kiosks to also work as points of sale, like they do in shopping centres.

“If the kiosk has all of this technology it could be equipped with a bag scale and take payment for excess luggage allowance and could also sell airline tickets at the airport as well, thus completely integrating the process – this is already being looked into at some Asian airports,” Brazzolotto says.

“In the future kiosks will also be able to handle biometric passports.”

Kiosks are being adopted by passengers but the process is slow and suspicion of new technology has to be overcome by providing hosting.

As time goes on kiosks will become more accepted but the technology is evolving rapidly so that kiosks will be able to carry out more functions than previously imagined.

This may have a large effect on the running of an airport particularly as large halls for check-in will be able to handle a greater passenger volume or may even be not needed. As ATMs are accepted as a way of life now so will self-service check-in kiosks be in the future.