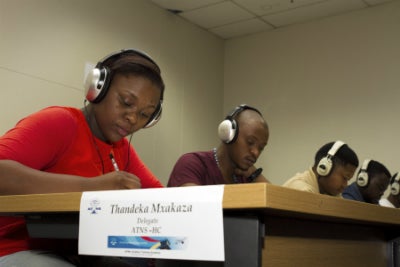 Thandeka Mxakaza always wanted a career in aviation, but because she could not afford pilot’s training, enrolled for a Bachelor of Commerce (BCom) degree at the University of the Free State in her native Bloemfontein, Free State Province.

"I always thought it was impossible being a pilot or a flight attendant," she laughs. But then, through Facebook, she became aware that there were other options, among them air traffic control. "I also learned that I could apply for a bursary to do air traffic control through the Aviation Training Academy (ATA)," she adds. Fast forward a few years, and Mxakaza, with a BCom degree under her belt, is one of nine women in the current intake of 27 school-leavers who began training at the academy in January.

For many matriculants, says ATA principal Tendani Ndou, university study seems to offer the gateway to a good career. However, as the recent Fees Must Fall campaign demonstrates, this can be the hard option for many, particularly those from disadvantaged backgrounds. She urges matriculants to look more deeply at their options.

"We offer matriculants the opportunity to gain world-class accreditation in air traffic control," she says. "Air traffic control is a highly specialised discipline that is experiencing a skills shortage; in addition, aviation is a growing industry that is vital to both tourism and international trade. This combination means good job prospects and a stable career path in an exciting sector" concludes Tendani.

ATNS Human Capital Executive Thandi Thankge says that the organisation is focused both on creating a pipeline of talented young South Africans to enter the industry, as well as playing a role in helping to build the country’s skills and provide opportunities for people from disadvantaged backgrounds.

"We particularly want to make matriculants in the rural areas aware of the potential for building a fulfilling career in aviation," Thankge says. "We also want to inspire young women to enter what has always been seen as a male-dominated industry. Our current intake of 27 matriculants is one-third female, but we would like to improve that balance."

The selection process is tough, warns Thankge, something that Mxakaza verifies. Matriculants must have at least a Level 4 pass in both Maths and English, and also have to undergo rigorous psychometric and medical testing, along with conventional interviews. "Air traffic controllers hold the lives of many in their hands, so we have to be sure we are getting the right people, both in terms of skills and personality," Thankge says. "For example, around 80 applied for this round, but only 27 made it."

Once Mxakaza and her fellow students have completed a four-week aviation awareness course, they will start on the core content (Introduction to Air Traffic Management) module for just over three months. Then they will be assessed for entry into the Air Transport Controller Assistant course, which will include on-the-job experience.

They will then choose between working in an area control centre, which is a hub that is used to control aircraft across the airspace between two points; or approach control, which deals with guiding the aircraft during landing and take-off or tower control, which involves ground control of aircraft.

It’s a rigorous training programme, notes Tendani, but it’s vital to ensure that graduates have the right skills to ensure the safety of air passengers and crews in South Africa’s increasingly busy skies. "You can’t compromise on training," she says.

For now, says Mxakaza, she’s focused on her course. The Academy has everything one needs, she enthuses, including the opportunity to meet new people and learn new skills. "It’s a great way to learn about the industry, and who knows, maybe one day I’ll be able to train as a pilot! Now that I’m here, though, I realise how little people know about what aviation has to offer, especially us girls," she says. "I’d definitely like to play a part in helping to raise awareness about aviation."