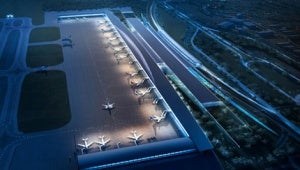 Vanderlande Industries officially signed the contract it received for the realisation of the new baggage handling system which will be installed in Terminal 3 of Jakarta Soekarno-Hatta Airport (Indonesia). The order was received from PT. Jaya Teknik Indonesia, Vanderlande’s partner in Indonesia and part of the winning consortium.

The winning consortium for design and build of the extension of Terminal 3 is led by PT Wijaya Karya and consists of several engineering and construction companies, among which our contract party Jaya Teknik. The consortium won because of the best overall balance of system design, compliance and price.

In 2012 the contract for the baggage handling system at the new Kuala Namu Airport near the city of Medan on the island of Sumatra was also signed.

The multi-million dollar order Vanderlande received from Jaya Teknik covers the first and main phase of the project. The total Baggage Handling System is almost mirrored on Domestic side and International side. It includes 24 automated Self Bag Drop positions in the departure check in area, 108 conventional check-in positions divided over 12 check-in rows, integration of Level 1 and Level 3 screening machines, automated transfer handling by means of discontinuous vertical conveyor from baggage hall to first floor and final sorting by two closed deck HELIXORTER tilt tray sorters to make-up carousels. In addition, a phase 2 is expected to integrate an Early Bag Storage (EBS) system, extra self bag drop facilities, and extra arrival subsystems into the BHS system.

The first phase of Terminal 3, located on the eastern side of the airport, consisting of the first of the two planned piers, was opened on April 15, 2009. In the newest master plan Terminal 3 will be designed in a U-shape. When completed, the new terminal will increase the airport’s capacity with an extra 25 million passengers per year. The existing system in Terminal 3 will remain in operation while the new system is being installed. The new Terminal is expected to open July 2015; Vanderlande will commence site works as from June 2014.

Soekarno-Hatta International Airport is the main airport serving the greater Jakarta area on the island of Java, Indonesia. Terminal 3 opened in 2009, but in 2010 the total number of passengers reached 43.7 million, surpassing the 38-million passenger capacity of all 3 terminals. In 2012, the airport was the 9th busiest airport in the world with 57.8 million passengers, a 12.1% increase over 2011. It is also the busiest airport in the Southern Hemisphere.

To overcome the under-capacity, on 2 August 2012 the ground breaking was done at Terminal 3 to turn it into an Aerotropolis airport which can serve 62 million passengers per year. This is predicted to be completed at the end of 2014.