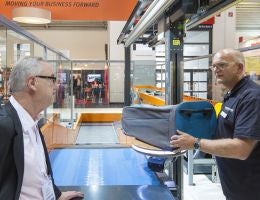 With its automated reconciliation feature, Vanderlande’s STACK@EASE was exhibited as an integral baggage handling system component at inter airport Europe 2015 in Munich, Germany.

At a number of airports, it is not uncommon for baggage handlers to scan bag tags with handheld devices. This takes up valuable time and effort at locations in which there is pressure to load efficiently, such as preparing baggage reconciliation at the flight make-up stage.

Until now, the manual scanning of tags slowed down the process of loading containers. However, by integrating the scanners into STACK@EASE, the speed of this procedure can be greatly increased.

This also helps handlers to sort bags more quickly and comfortably, as less physical effort is needed during the loading process. Through simple controls, integrated in the bamboo support disc, a baggage handler triggers the cameras, which scan the bag tags automatically.

This completely new approach, in which a loading aid is an integrated part of the baggage handling system, was demonstrated at inter airport Europe. Visitors to Vanderlande’s stand had the opportunity to see the solution up close and get a feel for STACK@EASE’s intuitive design.