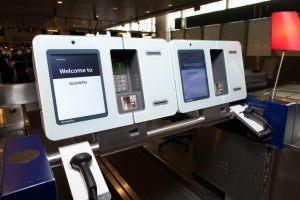 This year Vanderlande Industries France and Type22 in the Netherlands signed the contract for the delivery and installation of four Scan&Fly self bag drop units at Paris Charles de Gaulle airport. The units are intended for a three month trial period and will be used by Air France passengers in Terminal 2E.

The order was received from Aéroports de Paris, who owns and operates three major airports in the Paris region (Paris-Charles de Gaulle, Paris-Orly and Paris-Le Bourget) and 10 general aviation airfields.

Aéroports de Paris chose Vanderlande and Type22’s solution for this trial because Scan&Fly offers many strong points: like its ability to switch between ‘agent operation by conventional desk’ and ‘Self Bag Drop operation’ and easy retrofit onto existing check-ins. It is also able to work in ‘one stop’ or ‘two stop’ mode within the same equipment.

The units will be retrofitted on existing check-in positions in the Departure Hall of Terminal 2E. For Aéroports de Paris and Air France the purpose of the test is to measure the reached capacity, and the overall performance of the Scan&Fly product. After installation of the four units it is expected that the trial will start in March.

Type22 is Vanderlande’s preferred supplier for new and retrofit installations of the Self Bag Drop solution Scan&Fly, based on a hand-scanner. Vanderlande Industries has worked together with Type22 since 2009 and one of the earlier results of the cooperation is our product BAGCHECK, which has been installed in Terminal 5 and Terminal 3 of London Heathrow Airport. You can find more information about Scan&Fly and BAGCHECK on the Vanderlande website and see Scan&Fly in action on the Type22 stand no. 1608 at Passenger Terminal Expo in Barcelona, from 25 to 27 March. Vanderlande will also be present at the exhibition on stand no. 1630.