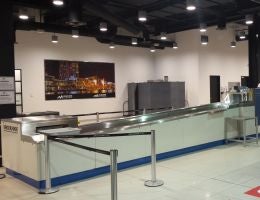 Vanderlande is implementing the SCANNOJET automated passenger checkpoint at Melbourne Airport in Australia, following successful installation of the system in Europe.

The company’s Australian Customer Centre is leading the project and will provide local coverage and service. This will serve as an important reference to other airports in Australia, New Zealand and the South Asia-Pacific region.

SCANNOJET integrates innovative technology that allows passengers to remove and collect their belongings without having to manually handle trays, offering high levels of comfort and security.

The installation has been used as a showcase for nearby airports to display the benefits of remote, rather than local, screening. The advanced technology utilised in remote screening allows operators to position themselves away from the stressful environment of the checkpoint. Instructions from operators are sent back to the checkpoint, which automatically filters trays containing suspicious items to a parallel conveyor.

The results have been positively received by Melbourne Airport, and it has been delighted with the performance and reliability of the system. By using Optosecurity remote screening and local screening in two different stages, it was possible to compare the results of both methods.

Remote screening increased passenger throughput rates by up to 15%, and experts believe even higher rates are possible by combining X-ray images from several units and optimising staff procedures.

The SCANNOJET system was demonstrated on 24 November during the Melbourne Airport Smart Security Technology Showcase 2015. The event attracted much attention from other airports and interested parties from throughout the region.