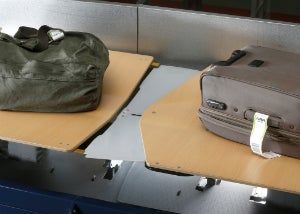 The latest development from BEUMER Group, the TrayDeck, is an effective solution for tilt-tray sorter stoppages.

Tilt-tray sorter stoppages can be caused by loose items, or baggage straps falling from the tray and becoming trapped in the gap between trays. This is a common cause of sorter jams and stoppages, which reduce the efficiency and throughput in airport baggage handling systems.

BEUMER Group customer support director Finn Laugesen explains: "With TrayDeck both capacity and energy consumption of the sorter remain unaffected whilst the risk of unplanned downtime is minimised."

TrayDeck’s movable deck accurately follows the movement of the sorter to eliminate the gap between trays whilst allowing them to remain tilted as they enter a curve. When used in airport baggage handling systems, TrayDeck prevents loose baggage straps from becoming trapped under the tray.

TrayDeck can be used in new installations, or as an upgrade to an existing system. Retrofitting TrayDeck onto a legacy tilt-tray sorter is a plug-and-play installation. The installation can be managed by Crisplant’s Customer Support team, and carried out by in-house technical or maintenance teams.

The use of TrayDeck as a retro-fit upgrade has been thoroughly tested in legacy Crisplant tilt-tray installations, and is currently being installed on a number of sorters in the Middle East and Americas.

TrayDeck will feature on BEUMER Group Stand No 1050, Hall B5 at Inter Airport Europe, which will take place from 6 to 9 October in Munich, Germany.