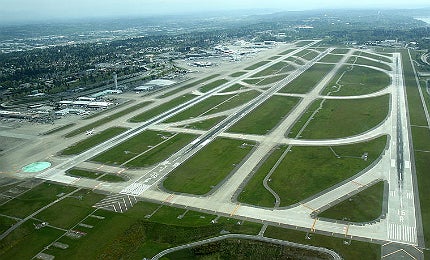 Seattle Tacoma International Airport’s master plan update, which was approved and adopted in 1997, included elements of the north end development programme. This programme was to address the need for increased terminal space, improved transportation to and from the airport, consolidated rental car facilities, proposed roadway revisions and parking.

The terminal expansion and concourse A was completed in June 2004. The total investment for the airport’s ten-year construction plan was more than $4.2bn.

Seattle Tacoma served 32.8 million passengers and handled 279,625 metric tonnes of air cargo in 2011. Passenger volume increased by four percent from 2010, making the airport the 16th busiest in the US in 2011.

The new terminal has made a big difference, equipping the airport with the capacity it needs to handle the volume of passengers and cargo for the future.

The slanted curtain walls allow a wash of sunlight while the graceful, overlapping curved panels of the ceiling look like an inversion of a jetliner’s flaps extended for landing.

The central terminal features some unique architecture, which is practical and unforgettable. Famed landscape architect Robert Murase also designed a unique rock and water feature for the arrivals hall.

The design of the 240,000m² central terminal redevelopment started in 1998; the architects were asked to design a terminal that created a central heart for the entire airport and respected its natural context, including the Olympic mountain range, forests and the Pacific Ocean. A key challenge was to restore the view from the airport terminal so that travellers could enjoy the pleasures of the area’s natural beauty and observe planes arriving and departing.

"Passenger volume increased by four percent from 2010, making the airport the 16th busiest in the US in 2011."

The west face of the central terminal, also called the Pacific Marketplace, is a 60ft-tall, 350ft-wide glass wall that curves bi-directionally in both elevation and plan. Unlike a typical window wall system that uses a system of aluminium mullions or trusses to support the weight of the glass and resist wind loads, this wall is supported on a net of tensioned steel cables. Each cable is tensioned to an average of about 29,000lb.

In high wind it is anticipated that the middle of the wall will deflect 6in to 10in each way. The glass is mounted on the cable net using cast aluminium ‘spiders’ that clamp onto an intersection of vertical and horizontal cables and attaches to the corner of four separate panes of glass. In addition to being the largest glass wall of its kind in North America, it affords direct views to the airfield and the Olympic mountain range.

With a site that dictated eastward expansion into the tarmac, the design team created a fan-shaped Pacific Marketplace instead of elongating the historical, trapezoid-shaped terminal. The roof steps up from the structure, gently rising and descending, creating an elegant form that complements the shapes of the glass wall.

The cable-suspended glass wall includes 449 panes and 1.1 miles of cable. The 130,000ft² Pacific Marketplace succeeds through a combination of its extremely efficient layout, the 40,000ft² of concessions that line its perimeter, and four giant flight information display monitors viewable from anywhere within the 500-seat indoor piazza. It is a place where visitors can shop, eat or relax.

Some of the historic designs from the original 1949 terminal were preserved. Elevator doors are engraved with a design taken from old security pavilion glass. A custom frieze lines one of the halls and recalls terracotta moulds from the 1949 terminal’s doors. A terrazzo floor pattern came from a compass design in an original building document and marks the entrance to the security checkpoint.

Passengers enter the Pacific Marketplace after passing through a consolidated central security checkpoint. The high-capacity checkpoint replaces two smaller ones. The reasons for this included aiding circulation, cutting down on the likelihood of a breach and increasing the ability to open additional security posts during peak periods.

From the Marketplace core, passengers are guided to pathways branching left and right to their gate on any one of the six concourses. If their time allows, they can use the Marketplace amenities or stroll down either of the shopping malls. The facility adds 20 gates to the airport with the option of adding 20 more in the future.

Upgrades to the terminal have been coordinated with upgrades to the concourses, control tower and administration building because of their proximity to one another. The expanded terminal buttresses the administration building, and new concrete shear walls and steel bracing are integrated into both the terminal’s existing structure and its new construction.

There are four new baggage carousels installed at the airport. The new integrated security system for outgoing baggage features 100% explosives detection equipment in an efficient, in-line conveyor design. This system will handle one-third of all baggage at Sea-Tac, on average about 52,000 bags on a typical day.

Another five-storey, 2.1 million ft2 rental car facility opened in May 2012. It was originally scheduled to open in 2011, but the construction was temporarily suspended and recommenced again in July 2009. The facility is the largest LEED silver certified project in the US and was built at cost of $419m.

The architect for the central terminal project was Fentress Bradburn Architects of Denver and the associate architects were Streeter and Associates of Seattle.

"The total investment for the airport’s ten-year construction plan was more than $4.2bn."

The general contractor was JE Dunn Construction of Bellevue and the structural engineer was ABKJ of Seattle.

The civil engineer was RoseWater Engineering of Seattle and the mechanical / plumbing engineer was Wood Harbinger of Bellevue.

Construction has been completed on a new ($2.4bn) 14-mile central link light rail line, which is a critical piece in the region’s transportation future. The trains were inaugurated and began carrying passengers on 19 December 2009, stopping at 12 stations and running 4.4 miles on elevated tracks, 2.5 miles in tunnels and seven miles at grade.

The contractor Sound Transit will open a 1.7-mile extension to Seattle-Tacoma International Airport (costing $244m), adding a thirteenth station. At the same time, the port will spend $102m to expand its airport-access expressway, north of the terminal. By 2020, about 3,000 people a day are expected to board light-rail trains at the airport station.

As befits the airport of the capital city of the USA, Washington Dulles International Airport is an impressive facility, which is situated around 26 miles from downtown Washington DC on an 11,830-acre site in the state of Virginia (Loudoun and Fairfax Counties).

San Diego International Airport is located in San Diego, California, US, 20 miles from the Mexican border.