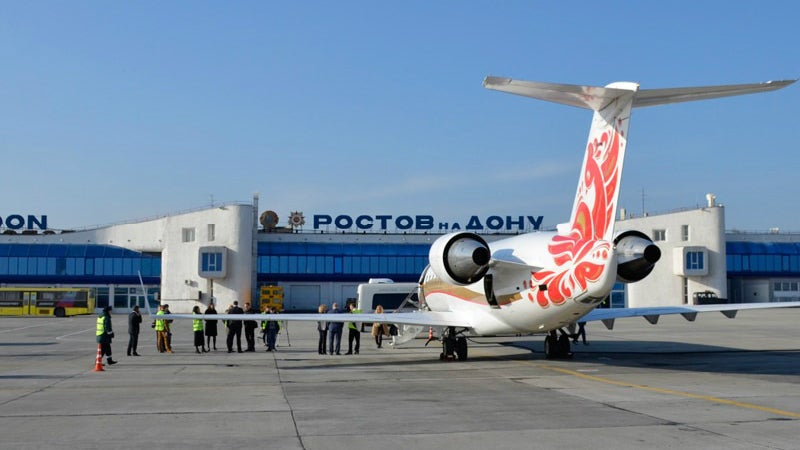 The airport is operated by Airports of Regions, a Russian airport holding company owned by Renova Group. It handled 2.06 million passengers in 2015, recording 11.8% growth year-over-year. It is served by 30 Russian and foreign airlines and is a hub for Donavia Airlines.

In March 2016 FlyDubai’s Boeing 737-800 passenger jet crash-landed at the airport due to poor weather, killing 62 people. Runway restoration work had been initiated on the following day, while the airport resumed operations on the second day after the crash.

The airport was built in 1925 in a 120-acre isolated plot behind the Rostov-on-Don village. The first airline service between Rostov-Kharkov-Eagle-Moscow started in June 1925. The airport carried 80 passengers in the first three months. The airway was widened in later years and the number of services from the airport, as well as the number of routes it serves were also increased.

A new terminal building was constructed in 1932, but the airport was destroyed during the second world war and had to be completely reconstructed in the years following.

The airport received international status in 1986 and, from 1991, offered regular trips to foreign countries.

Rostov-on-Don airport has a single terminal with a total area of 15,537m² and a passenger handling capacity of 600 an hour, including 450 international passengers an hour.

Relaxing spaces are provided, including a business lounge, a VIP room and a luxury hall waiting room for passengers.

The business lounge is located in the first floor of the terminal building and offers round-the-clock services to business-class passengers. The lounge offers cafe services with a variety of dishes and drinks. Passengers will be provided with a variety of forms of communication and free Wi-Fi.

The waiting room is located in the first floor in the international wing and offers soft armchairs for the guests to relax.

The VIP terminal is located in a separate building and works around the clock. It offers a comfortable waiting room with 52 soft furnishings seats, banquet hall with 32 seats and a bar area with 20 seats. It also has a private meeting room and a conference room.

Also available in the terminal are mother and child rooms, a snack bar, a health centre, a business saloon, and a chapel. Free Wi-Fi is available throughout the airport building area for all users.

Aviation security systems at the airport provide a set of measures to prevent unlawful acts in the airport premises. The security service is certified by the Federal Air Transport Agency on compliance with applicable laws in the field of safety in civil aviation. It provides pre-flight inspection to meet all the requirements and inspects all the visitors entering the airport complex.

“Rostov-on-Don airport has a single terminal with a total area of 15,537m² and a passenger handling capacity of 600 an hour.”

The cargo complex at the Rostov-on-Don airport features necessary production facilities for transportation including a warehouse for arrival and storage of domestic goods, and temporary storage for international arrivals of goods; a warehouse for domestic and international freight; a customs clearance control department; an inspection department; border veterinary control; and plant quarantine. It is also equipped with ground handling facilities.

The airport is operated with a single runway, 04/22, which is 2,500m-long and 45m-wide. The runway was reconstructed in 2015 by laying 600m of asphalt concrete pavement throughout the strip. All the lighting equipment was also updated during the reconstruction project.

CHO offers ground handling services to aircraft and helicopters at the airport.