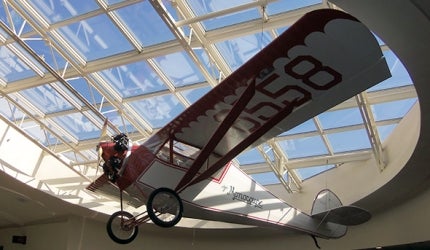 Quad City International is a public, commercial, military and cargo airport serving the cities of Eastern Iowa and Western Illinois. It is located at Moline in Rock Island County, Illinois, US.

"The airport, awarded "Illinois Primary Airport of the Year 2012", is operated by the Metropolitan Airport Authority."

The master plan of the airport was formulated in 1989, with a draft master plan update and companion airport layout plan (ALP) prepared in 2005. The Federal Aviation Administration (FAA), however, did not approve these updates.

The airport authorities are, therefore, framing a new master plan in 2012. The latest version includes the addition of a new passenger terminal inline baggage system, construction of access road and parking, land use planning / development and improving the sustainability.

The passenger terminal area is situated between the thresholds of Runway 23 and Runway 13, in the North Central part of the airfield. The 61,000ft2 terminal building was constructed in 1985. It contains one main terminal building with two concourses A and B. The two concourses were modified in an expansion project in 2001. The terminal also has a connector hallway equipped with security screening equipment between the main building and the restricted concourses. Two security checkpoints are located in the main terminal.

The northwest section of the airport includes enplaning passenger services and administrative offices of Airport Administration Authority and Transport Security Administration (TSA). The south-east section of the terminal contains deplaning passenger services and concessions. Civil Air Patrol (C.A.P.) / the US Customs Building is located at the east of the terminal building at the north apron.

The baggage claim area inside the terminal has two rotating conveyors and public seating space. The terminal also includes concession areas with a restaurant, a gift shop, an art gallery and restrooms.

Rockford International Airport (RIA) or as it sometimes called Greater Rockford Airport is situated around 68 miles northwest of the City of Chicago and just four miles south of Rockford in Winnebago County on a site of 2,900 acres (1,174ha).

A $17m expansion project was completed at the airport in 2001. It included a major overhaul that added two new state-of-the-art concourses, new concessions and an art gallery to the airport. The size of the terminal was increased to 160,000ft2 on the 2,021 acre site.

Runway 9/27 was reconstructed in 2011. The reconstruction was planned in 2007 as part of a $34m airfield improvement programme. All the three runways were closed and a temporary runway (10/28) of 6,500ft length was used during this period. In September 2012 the airport was sanctioned $1.8m for the construction of a new customs facility and $2.8m for the purchase of snow removal equipment.

Construction projects planned at the airport in 2012 are worth a total of $8.8m.

Cargo facilities are located in the north-east section of the airport. The air cargo apron has
396,000ft2 of pavement for cargo aircraft parking and gives access to three cargo building facilities.

Runway 13/31 is built of bituminous and portland cement concrete. The 7,301ft-long and 150ft-wide runway has two primary taxiways, F and B.

The future of Quad City International