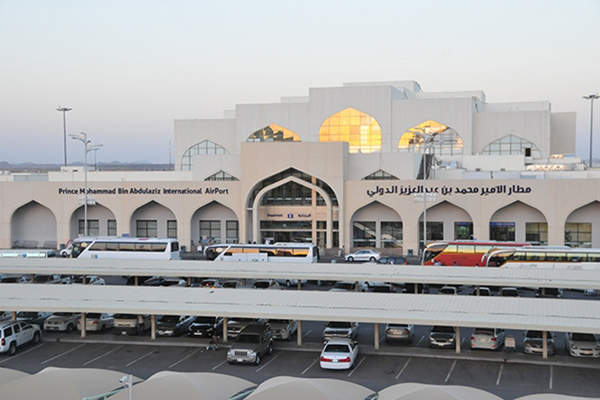 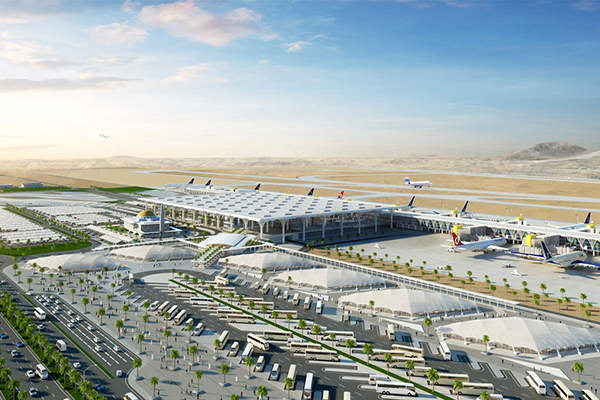 The new terminal at Madinah Airport was commissioned in July 2015. Image courtesy of GMW Mimarlık. 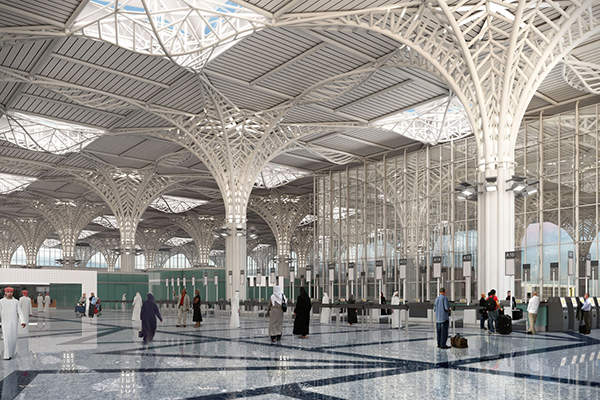 The design of the new terminal at the airport was inspired by palm trees. Image courtesy of GMW Mimarlık. 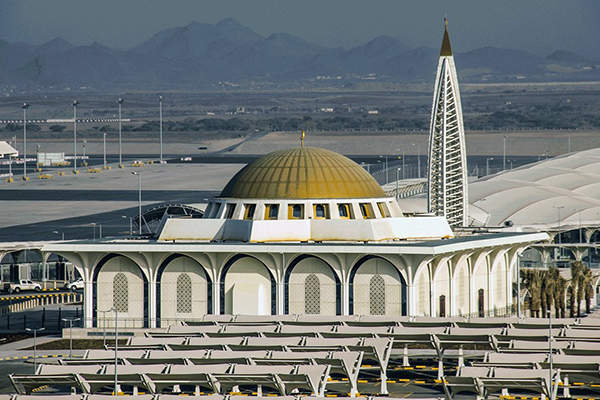 A mosque was constructed as a part of the Madinah Airport expansion project. Image courtesy of CH2M HILL, Inc. 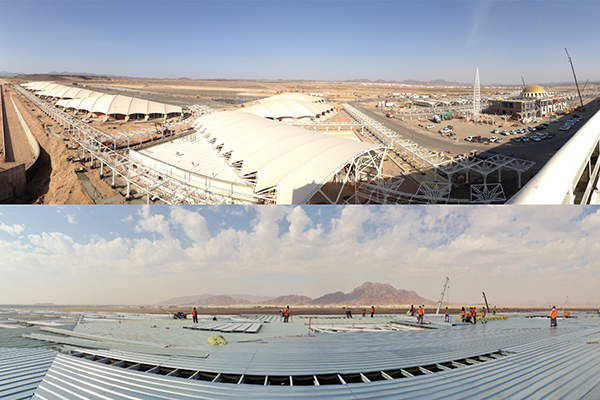 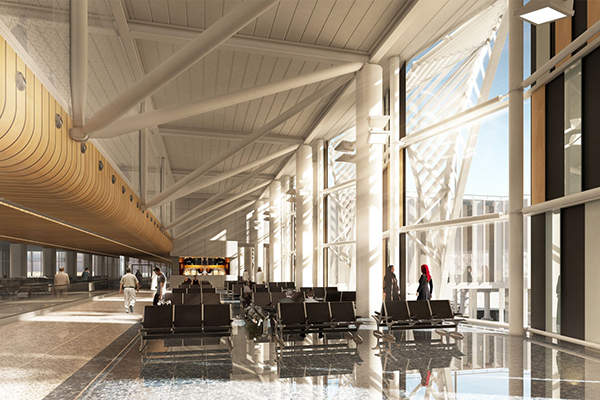 The new terminal building has a space of 156,940m². Image courtesy of GMW Mimarlık. 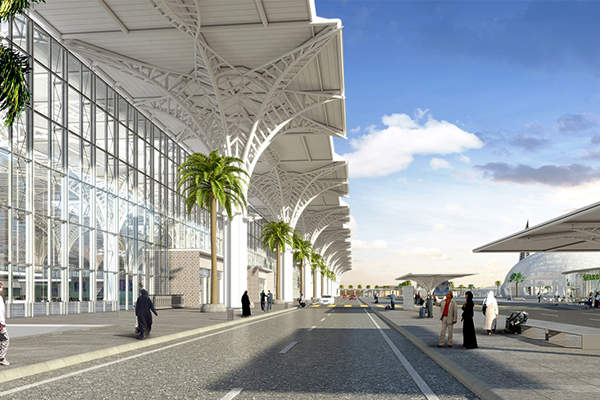 The project included the construction of 20 ancillary buildings. Image courtesy of GMW Mimarlık. 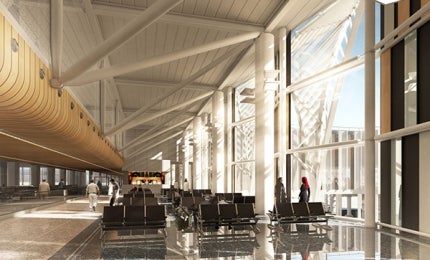 The airport is one of the two major gateways to Saudi Arabia and the holy city of Madinah for Hajj and Umrah pilgrims, the other one being King Abdul Aziz International Airport.

In 2012, Saudi Arabia’s General Authority of Civil Aviation (GACA) appointed Tibah Airport Development Company, a consortium led by TAV Airports, as the operator of the airport for a concession period of 25 years, making PMIA the first privatised airport in Saudi Arabia.

“The first phase of the expansion included the construction of a new passenger terminal building, which was commissioned in July 2015.”

Passenger traffic at the airport increased by approximately 21% to 5.7m passengers in 2014, compared with 2013. The increasing passenger growth led to a phased expansion and reconstruction project at the airport in 2011.

The first phase of the expansion included the construction of a new passenger terminal building, which was commissioned in July 2015. This will increase the airport’s throughput from 5.7 million a year to eight million passengers a year.

Design of the new terminal at the Madinah Airport

The new terminal is designed to integrate its architecture with the existing structures in the airport. The design was inspired by the Hejazi architecture, and palm tree was the main source of inspiration for the architectural form. Focus was more on elegant, modular and spacious interiors.

The grand canopy, which was formed with structures of an octagonal family of radiating, intersecting and concentric line work, resembles Islamic geometries and stands-out in the entire design.

Besides the aesthetic appeal, the design also facilitates the functional requirements of the terminal. It has simple yet logical layout with well-organised passenger routes, security and safety, operational efficiency, adaptability and flexibility.

The terminal is the first outside the US to receive Green Building Council (USGBC) LEED GOLD certification.

Construction details and facilities of the new Madinah Airport terminal

The new terminal construction was initiated in the first half of 2012 and was concluded in 30 months.

The terminal comprises state-of-art facilities and is built in accordance with the highest international standards. It is modularly constructed to allow further expansion in Phase II that will increase the airport’s capacity to 12 million passengers a year, which can be expanded further up to 16 million before 2037.

The three-storey terminal building has a space of 156,940m², 31 passenger boarding bridges, 42 elevators, 28 escalators, 24 travelators and ten baggage claim carousels. The total number of departure gates at the terminal is 18, with air-bridges linked to aircraft. The terminal also features 16 aircraft stands and 20 remote apron stands.

Abu Dhabi International Airport is expected to handle 20 million passengers over the next few years.

The project also included widening and extension of runway, and construction of new taxiways for accommodating A380-size aircraft. The taxiways connect the runway directly to the terminal building to ensure fast and efficient movement of the aircraft. The fuelling and lighting systems in the airport were also upgraded.

The project also involved the construction of a mosque that can accommodate 1,000 worshippers, 20 ancillary buildings such as Hajj facilities, administrative buildings, VIP terminal, power station, and a new aircraft rescue and firefighting building.

The GACA awarded the contract to develop and operate the Madinah airport under a build, transfer and operate (BTO) agreement to TIBAH, a consortium comprising TAV Airports, Saudi Oger and Al Rajhi Holding Group, in 2011. The project, valued at $1.2bn, was the first to be constructed by the private sector in the BTO style in MENA region.

US-based global engineering consultancy CH2M Hill was appointed as an independent engineer for the project by GACA and TIBAH. As part of the contract, CH2M Hill reviewed the design of the expansion and offered on-site monitoring services to ensure that the construction of facilities was in accordance with the agreed technical requirements.

Financing for the new passenger terminal

The total estimated investment for the project was $1.2bn, which was obtained through the Islamic fund from Arab National Bank, National Commercial Bank and the Saudi British Bank. It was the first large-scale project entirely financed through Islamic fund under the public-private partnership (PPP).