Expand
The upgraded Terminal 3 at the Phoenix Sky Harbor international airport was inaugurated in January 2020.
The modernised terminal features a new consolidated security screening area that reduces passenger waiting times.
A total of 31 new common ticket counters have been added to provide flexibility among airlines operating in the terminal.
Developed with an investment of $590m, the project was part of the City of Phoenix’s Capital Improvement Plan 2015-2020.
The south concourse provides airline hold rooms and new passenger facilities.
Terminal 3 was renamed as John S. McCain III Terminal 3 in 2017. Credit: Phoenix Sky Harbor International Airport. 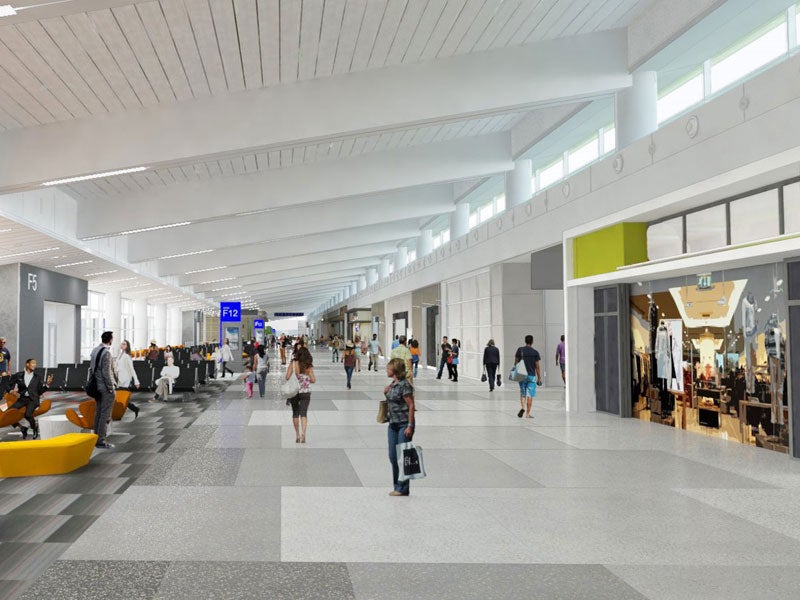 The $590m redevelopment project was part of the City of Phoenix’s Capital Improvement Plan 2015-2020, which envisaged bringing the airport and its surrounding areas under one roof.

Initiated in 2015 with the launch of Terminal 3 (T3) modernisation, the project has enabled the terminal to handle increased passenger traffic, while creating a world-class travel experience for the passengers. The city voted in favour of naming the terminal the John S. McCain III Terminal 3 in 2017.

The modernisation was divided into three phases to facilitate execution and reduce disruption to daily terminal operations.

Details of the upgraded Terminal 3 at Phoenix airport

Phase one of the modernisation project transformed the 36-year-old T3 into a state-of-the-art facility. The upgraded terminal now offers new interior and exterior finishes, a new facade, impressive views of the city skyline, new infrastructure, speciality facilities, and an improved travel experience for visitors.

The upgraded terminal also saw the addition of 31 new common ticket counters that allow flexibility among the airlines, including Delta, Frontier, Hawaiian and JetBlue airlines.

A new West Plaza, which is visible from all three levels of the terminal, was developed adjacent to the terminal’s departure atrium. Accessible to all the travellers, the new plaza provides an outdoor area with Arizona’s native plants/trees, passenger walkways, a seating area and a dog park for pets. It also features artwork and sculptures throughout the garden.

At the East arrivals plaza on the north curb, a stained glass wall was installed by Ken Toney, an Arizona glass artist. The geometric design of the glass wall also acts as a major way-finding exterior element, which can be seen on the north curb of the terminal.

The North Concourse offers amenities such as a nursing room, a family restroom, an animal relief area, access to power outlets at every seat and hearing loop connectivity in all gate areas and hold rooms. A new South Concourse with 15 gates and several additional customer amenities were developed.

A new museum gallery is also added past the security area, allowing the travellers to experience the cultural and artistic heritage of Arizona while waiting for their flights.

The closed, internally oriented structure of the terminal was transformed into an open and natural light-filled space by removing sections of the mezzanine and pre-cast facade.

The terminal features a new striking glass facade while retaining its basic structure designed in 1978. The large overhanging pavilion roof made with acoustic metal ceiling panels helps reduce glare and heat absorption, while providing views of the city and landscape.

The top/fourth level of the building features skylights that provide clear views of the sky through glass panels whose gradient opacity and angle eliminate glare, providing a clear view of the environment.

The re-composure area of the terminal features a glass atrium that provides unique views of the airfield and the Phoenix Mountains allowing passengers to gather and explore the surroundings.

The second phase of the terminal modernisation included the demolition of the south concourse, which was replaced by a new 15-gate concourse to be configured linearly. The concourse can be further expanded to enable the closure of airline operations at Terminal 2.

In this phase, new food and retail units, airline hold rooms, and new passenger facilities were built with the new south concourse comprising 15 gates. It was opened in January 2019.

DWL Architects + Planners was the prime architect for the modernisation project. The company led the design team and was involved in core building design and overall terminal planning.

SmithGroup was responsible for the exterior design, lighting, landscaping and sustainability of the project. Cargon acted as the programming and interior design lead for the project.

The HuntAustin joint venture between Hunt Construction Group and Austin Commercial was awarded the design-build contract for the project.

Rider Levett Bucknall (RLB) was appointed to provide independent estimations to validate the cost projections of the project.

Kiewit, a North American construction company, was selected to replace the existing pavement structure at Terminal 3 north inner apron. The hydrant fuel system underneath the inner apron was also upgraded along with storm drain and trench drain systems to collect the inner apron and roof drain runoff.

PM Technologies (PMT), a project management firm headquartered in Georgia, US, was appointed to manage the full renovation of a 9,000ft² facility for Delta Air Lines. The renovation pertained to mechanical, electrical and plumbing (MEP), owner-finished items, branding, kitchen equipment, vendor equipment, IT infrastructure and Wi-Fi.

DPR, an American construction firm, was selected to build several restaurants, including SanTan Brewery. It was built as a stand-alone structure with exposed beams and columns. The flooring was sealed in such a way that it would not affect the American Airlines office located below.

IMEG, an engineering design firm based in Illinois, US, had reviewed the construction design and documentation, assessed the progress of the work as per the documentation and performed functional testing of MEP and building automation systems for the project.

One Works
One Works is an independent design and consultancy firm offering...

Securitas
The Securitas Group is a global knowledge leader in security....
SUBSCRIBED