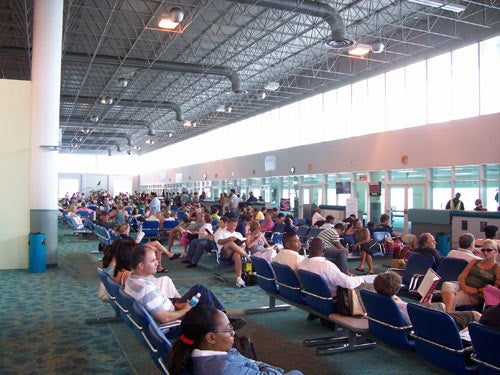 In the fiscal year 2012, it handled 3.3 million passengers, and in July 2009, the airport unveiled a major expansion programme to handle the increasing traffic.

Costing $409.5m, the three-phase expansion was completed in October 2013. The expansion enables the airport to serve 5.2 million passengers by 2020.

In April 2007, NAD signed a 10-year contract to operate the airport. Since 2007, the airport has undergone more than $11m-worth of upgrades.

"The three-phase expansion was completed in October 2013. The expansion enables the airport to serve 5.2 million passengers."

The expansion was carried out in phases. Phase one began in July 2009 and was completed in March 2011 at a cost of $191.1m. It included the construction of a 247,000ft² terminal and a pier for US departures.

The terminal is equipped with 55 check-in counters. An inline explosive detection system capable of handling 1,800 bags an hour was installed along with a bag-weight imaging system and an automated baggage sortation. The baggage sortation system features three make-up carousels.

As well as the terminal building, phase one also included the construction of a one million square foot asphalt apron, an additional parking facility with a capacity of 2,000 vehicles, a storm water drainage system and improvements to roadways.

Phase two of expansion worth $144m was completed in October 2012. The existing US departures terminal was partially demolished and a new 226,000ft² international arrivals terminal was constructed.

The final stage of the expansion project was undertaken in phase three. It added a departures terminal for domestic and international passengers and a terminal exclusively for domestic arrivals.

The international and domestic terminal features 42 check-in counters. It is also equipped with 200ft of baggage handling, security and sortation systems equipment.

The design created a total terminal area of nearly 606,000ft². The expansion also included construction of 10 aircraft bridges and 30 aircraft ground loading positions, which accommodate up to 12 aircraft.

Terminals and runways at the Lynden Pindling Airport

The airport has two terminals, which handle daily and weekly flights from Florida, New York, Philadelphia, Toronto, and Montreal. Excluding US flights, terminal one serves chartered, domestic and international flights.

The US flights are handled by terminal two, which also serves domestic flights. Both terminals have a single runway. The terminal area is close to both long-time and short-time parking areas.

The airport is equipped with US border pre-clearance facilities, enabling US flights to operate as domestic arrivals.

Other facilities at the airport include a cafe, duty free outlets, and a branch of the Royal Bank of Canada.

The contract for the airport’s phase-one expansion was awarded to Canada-based Ledcor Group.

"The airport is equipped with US border pre-clearance facilities, enabling US flights to operate as domestic arrivals."

Ledcor worked in partnership with Woslee Construction for the same.

The airport’s baggage handling, sortation and explosive detection system were supplied by Glidepath.

The contract to provide fully integrated systems to Lynden Pindling Airport was valued at $21m.