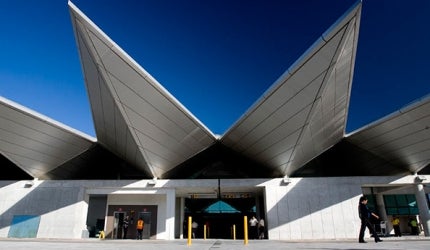 La Aurora International, located around 6km from Guatemala in Finca San, is the main airport serving the city. The third busiest airport in Central America, La Aurora recorded passenger traffic of 1.06 million in 2011.

The airport is owned by Ministerio de Comunicaciones, Infraestructura y Vivienda and operated by Dirección General de Aeronáutica Civil. It is a mixed public, general aviation and a military airport.

La Aurora international airport’s history dates back to the early 20th century when Lord Dante Nannini established an aviation academy to the east of the city at Campus Martius in 1911. In September 1929 the government led by General Lazaro Chacon set up a Directorate General of Civil Aviation as a unit of the ministry of communications and works. In the same year Chacon also began scheduled flights authorising Pickwick Airways to perform these operations from Guatemala, Mexico and the United States.

The airport was used by the United States Army Air Force (USAAF) Sixth Air Force throughout World War II. A new 77,200m² passenger terminal was put into operation in 1968, expanding the airport’s capacity. In June 2007 the airport achieved FAA Category I certificate.

The airport has two passenger terminal concourses, central and north. The northern concourse has 15 gates in which 12 are traditional and three remote. The central concourse is used for larger aircraft and provides four to six gates depending on the size of the aircraft. Passenger facilities at the terminal include a bank, post office, bureau of change, several restaurants and duty free shops.

The airport terminal has two exclusive VIP lounges, Los Añejos Business Lounge and Copa Club. Cargo operations are handled at COMBEX-IM and in the DHL hangars located beside the terminal building.

La Aurora International was renovated in 2007, along with many other airports in Central America. Keeping the original design in mind, it was partly demolished in the north and a new glass designed concourse with a capacity to handle 22 aircraft was constructed in 2008-09.

"La Aurora airport has a single, 2,987m-long asphalt runway (01/19), which is capable of handling some of the world’s largest aircraft."

The terminal added 11 gates in 2007, seven of which were equipped with jetway bridges. A new parking garage with a capacity to handle 500 vehicles was also built, while brand new ticket counters were also added. The size of the terminal expanded from 26,000m² to 47,000m².

The airport administration building is being renovated and a regional passenger terminal is being constructed. The baggage carousel is being expanded to cope up with the growing demand.

La Aurora airport has a single, 2,987m-long asphalt runway (01/19), which is capable of handling some of the world’s largest aircraft. Runway renovation is taking place at the airport, while the first phase consists of repaving and developing the illumination system.

Siemens I&S was awarded a contract for the installation of the baggage screening and handling system at the La Aurora international airport. The contract includes installation of a baggage handling system with 100% X-ray screening of the baggage check-in at a frequency of 2,000 bags per hour. The system has a five-stage security platform that incorporate functions such as detection of explosives using X rays, tomography imaging using computer aided systems and manual inspection.

Siemens will also install integrated software for logging, controlling and monitoring of the system activities, and will be based on the standards of United States Transportation Security Administration (TSA).

Future developments at the Guatemalan airport

Plans to shift all the cargo operations to San José Airport in Escuintla and Puerto Barrios Airport in Izabal are underway. This will give La Aurora scope for further expansion of the terminal area and to carry out improvements of taxiways.

In July 2012, Spanish technicians performed a feasibility test for construction of a railway link to the airport from Antigua Guatemala.