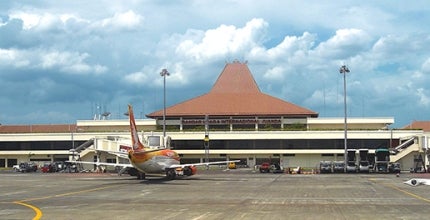 Juanda International is operated by PT Angkasa Pura I. In 2011, the airport handled 13.7 million passengers and 95,145t of cargo, and recorded 15,772 aircraft movements making it the third busiest airport in Indonesia.

"Juanda International is the third largest airport in the country."

Originally built as a naval base in February 1964, Juanda International Airport was also used to serve civilian aircraft. PT Angkasa Pura I took over the airport’s management and operations in January 1985. Flights to Singapore, Hong Kong, Taipei and Manila started in December 1987, but the airport got its international status after opening its first international passenger terminal in December 1990.

The airport has a single passenger terminal building that is divided into international and domestic sections designated as Terminal A and Terminal B.

Terminal A is relatively smaller in size and handles all international and some domestic flights. Terminal B has a larger space and handles all domestic operations at the airport. The terminal building has 11 air bridges. The 148,000m² apron has a capacity to handle 18 aircraft (two wide body, 11 medium-sized aircraft and five small aircraft) simultaneously.

Soekarno Hatta or Jakarta International airport is located 20km west of Jakarta city centre in Cengkareng, Indonesia. It has been named after the first president (Soekarno) and first vice-president (Mohammed Hatta) of Indonesia.

Terminal 2 (T2), built to replace the old Juanda terminal, became operational in February 2014. The T2 is spread over 49,500m² and has the capacity to handle six million passengers a year. It is mainly used for domestic services but also serves as a special international terminal.

The existing terminal building reached saturation and had been handling six million more passengers than its capacity. Proposals to build a new terminal building were then discussed, with ground breaking carried out in December 2011. The expansion was a part of $678.4m redevelopment project by PT Angkasa Pura (AP) I.

The $80m new terminal 2 is designed to increase the airport’s capacity to 12 million per annum. However, the new terminal will still be insufficient to meet the anticipated growth in passenger traffic.

"Juanda International is operated by PT Angkasa Pura I."

The airport’s operator entered a partnership with South Korea’s Incheon International Airport Corporation (IIAC) to transform the airport into a world-class facility. IIAC is responsible for the maintenance of retail concessionaires in the new terminal.

The airport has a 15-level air traffic control tower. The tower has a capacity to handle 21 aircraft per hour. It currently handles around 40 to 45 aircraft operations at peak hours, however.

The airport has a single runway (R10/R28) stretching 3,000m in length and 45m in width. The runway is paved with asphalt.