One million per year 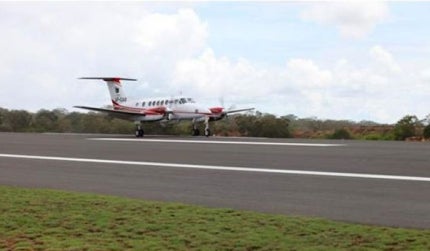 An automated fuel hydrant system and a state-of-art aviation refuelling terminal were opened at the airport in 2014. The fuel hydrant system is located within the apron and was constructed by China Harbour Engineering Company (CHEC) with a $7m investment. The aviation refuelling terminal and the 1.2km-long interconnecting pipelines were built by Dubai-based Amana Pipeline Construction with a $31m investment.

“The second phase of construction at the airport site is expected to be completed by 2017.”

The airport was built in an area of 2,000ha, with funding from the Chinese government. The airport construction is divided into two phases. Covering an area of 800ha, phase one began in 2009 and included the construction of basic airport facilities, a runway, an apron, passenger and cargo terminals, taxi way, access roads and other facilities.

The construction of phase one was completed in 2012 and the airport was officially opened in March 2013 by the president. The phase two development, named Hambantota International Airport Expansion and Facilities Upgrading Project, was awarded to China Harbour Engineering Company (CHEC) in 2013. The project was funded through a $100m concessional loan lent by Export-Import Bank of China.

The expansion includes upgraded hangar, airport terminal and facilities, as well as the construction of new parallel taxiway, a new cargo apron parking stand, taxiway and hangar. Phase two is expected to be completed by 2017.

The passenger terminal at HIA is spread across 10,000m² with a number of facilities, including a duty-free area measuring one million square feet. It has 12 check-in counters (ten international and two domestic) with inline baggage screening, ten emigration and ten immigration desks, two contact gates and two passenger boarding bridges.

The airport is provided with two open-air parking lots, while car parking in the terminal has 400 spaces. A remote parking area situated at a distance of 300m from the terminal offers parking at cheaper prices.

The design theme is aimed at creating an eco-friendly airport. Care was taken so as to ensure that no ecological and environmental imbalances would arise during the construction of the airport, while the existing environmental conditions in the neighbourhood will remain undisturbed.

The design of buildings and the airport infrastructure is planned to intermingle with the environment. The airport uses 15% of energy needed to run the facility from natural renewable sources to reduce the carbon footprint. Existing water bodies are preserved and new water bodies are developed to maintain the ecological balance.

The Hambantota and Monaragala regions are economically developing with a great scope for growth. Presence of an airport near these regions helps uplift the economic and business activities. Direct and indirect employment opportunities are created for the people around the airport.

The surrounding neighbourhood is a large agricultural zone and the cargo facility in the airport helps to enhance the export capacities and the economic activity of the country.

China Harbour Engineering (CHEC) was selected as the contractor for the construction of the new airport.

“The Chinese Government is extending its financial assistance for the project.”

In April 2012, CHEC awarded a contract to Cassidian for installation of the TETRA radio communication network at the new airport. The product, Claricor, was supplied to Queens Radio Marine Electronics of Sri Lanka, which was responsible for the installation. The network has an automatic vehicle location function, which is feasible to be integrated with the security systems of the airport.

AECOM is the lead designer for Hambantota International Airport.