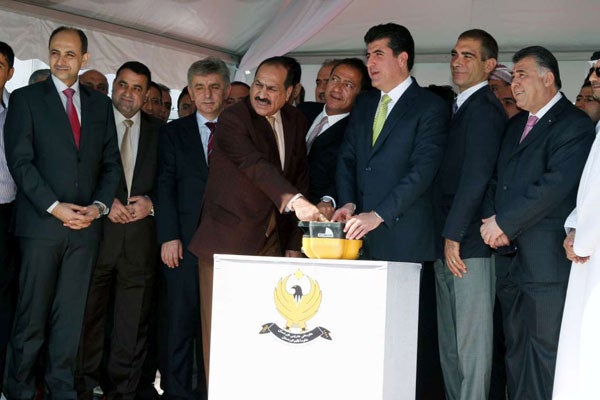 Duhok International Airport is a new airport being built in Kurdistan, Iraq, with an estimated investment of $450m.

The airport will be located 25km south-west of the Duhok province near the village of Sumail and will serve international airports of Europe and the Middle-East.

Duhok will be the third international airport in the Kurdistan Region, following the two existing airports, Erbil and Slemani, which serve more than 25 destinations in Europe, Asia and the Middle East.

Construction of the Duhok international airport started in September 2012 and is expected to be completed by 2015.

The airport will be operated by the Kurdistan Regional Government (KRG) and maintained by the Duhok Governorate.

"Construction of the Duhok international airport started in September 2012 and is expected to be completed by 2015."

The airport is being built on a land provided by the Government of Duhok and will cover an area of about 18,000m².

It will also feature six arrival and departure gates with direct bus access.

The ATC tower will house the aerodrome control, approach radar control, avionics equipment and a workshop. It will also house airfield ground lighting (AGL) equipment room and staff welfare facilities. The cost of ATC tower construction is estimated at $6m.

The aviation equipment will be installed with an investment of about $4m.

The airport will feature an automated check-in system, luggage handling systems, ATMs, custom and border control facilities and a business lounge. It will also provide services for disabled passengers.

Support facilities at the airport will include a central utility complex, rescue and fire fighting facilities and other necessary airfields.

The airport will feature a 3,850m long asphalt coated runway, which will be designed to handle medium-range aircraft such as the Airbus A-320. To be constructed with an investment of $40m, the runway will feature instrument landing system (ILS) Cat II.

Contractors involved with the airport’s construction

The airport is being constructed by a joint venture of Turkish companies Mak-Yol Construction Industry Tourism & Cengiz Holding.

"The airport will be operated by the Kurdistan Regional Government (KRG) and maintained by the Duhok Governorate."

Dar al-handersaht has provided master planning and design services for the project.

Incheon Airport Company (IIAC) signed a $9.03m project management service contract with the Dohuk Government in January 2012, as part of which IIAC will provide construction support services for the airport.

Baghdad International Airport, the largest airport in Iraq, is located about 16km west of downtown Baghdad. It is a joint civil-military airport operated by the Iraqi Government.

Located in the northern Gulf, Bahrain International Airport is one of the Middle East’s key hub airports. In recent years, the airport witnessed a spurt in passenger growth.