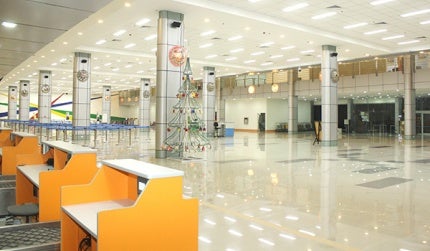 It is the fastest growing airport in the Philippines with a recorded 71% growth in passenger traffic from 2011 to 2012. Airport operations are managed by the Clark International Airport Corporation (CIAC).

The Philippines Government is set to upgrade 12 airports across the country in a move to improve tourism by attracting 10 million foreign tourists by 2016.

Two major developments of CIA were highlighted during this year’s Clark Aviation Conference held in the Philippines, which had the theme "Clark: Reshaping Philippine Aviation – The Aerotropolis Concept". The first development is to turn CIA into a major aviation hub in Philippines and the second is to transform it from a freeport zone into an aerotropolis.

An aerotropolis is an urban development concept in which the city is build around the airport, establishing connectivity between different groups of business people such as suppliers, workers, executives and vendors to bring a wider variety of goods to the global marketplace.

According to a study conducted by the Japan International Cooperation Agency, the annual passenger forecast for major regions in the Philippines, including the National Capital Region, Southern Luzon and Central Luzon, will increase from 49.8 million people in 2020 to 75 million in 2030, reaching 106.7 million passengers in 2040. These increasing numbers call for the further expansion and development of the airport.

The phase two expansion of the passenger terminal building at the Clark International Airport was completed in 2013. The expansion increased the annual passenger capacity of the airport to four million people from the previous 2.5 million people. The total investment on the expansion was PHP417m ($9.62m).

"Two major developments of this year’s Clark Aviation Conference were to turn VIA into a major aviation hub in the Philippines and to transform it from a freeport zone into an aerotropolis."

The Department of Transportation and Communications (DOTC) and the CIAC provided funding for the expansion as part of the Philippines’ long-term strategy for the development of airports.

The expansion increased the size of the PTB from 11,439m² to 19,799m². It added 21 new check-in counters, increasing the total number of counters from 13 to 34. Five arrival counters and 12 departures counters were also constructed. The expanded terminal currently has eight entry points and three customs stations. The modernised terminal started operations in May 2013.

The airport expansion includes construction of a new low cost carrier (LCC) terminal, which was proposed in December 2013. The objective of the new terminal will be to reduce the traffic congestion at the Ninoy Aquino International Airport, the primary airport of the Philippines.

Aéroports de Paris Ingénierie (ADPI) was appointed in February to conduct the feasibility and the development study as well to provide design for the LCC terminal. In June, the ADPI submitted the concept design of the new LCC terminal to DOTC and CIAC. The terminal construction is expected to start by the end of this year and is scheduled to be completed by the second quarter of 2016.

"The Department of Transportation and Communications and the CIAC provided funding for the expansion as part of the Philippines’ long-term strategy for the development of airports."

The new terminal will reduce the pressure on Manila Airport, spur the growth of air traffic in the Philippines and improve access to the northern part of Luzon. The airport taxes and handling fees at the new terminal will be less expensive, as well.

The construction of the new terminal is estimated to cost about PHP7.2bn ($164m), which will be funded from FASEP-Etudes, a development aid fund managed by the French Government.

The contract for installation of a new baggage handling system at the airport was awarded to R. Dan and Company in 2013.