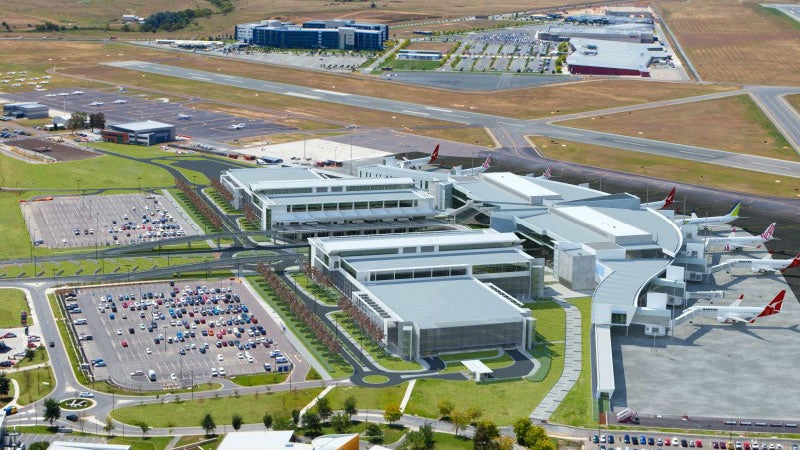 Canberra Airport inaugurated its new, state-of-the-art international terminal in September 2016. The new terminal replaced the existing building, which was unable to handle increasing passenger traffic at the airport.

International passenger and freight services were officially launched at the new terminal in September 2016 with the arrival of Singapore Airlines’ international flight SQ291.

Constructed with a total investment of $2bn, the new terminal can handle more than 12 million passengers a year, quadrupled from that in 2010.

The project created 85 new direct jobs and approximately 250 indirect jobs, which are expected to increase in the future.

Details of the new terminal at Canberra Airport

Construction of the new terminal was part of AirVolution, a planning and development project that was initiated in 2005 by the airport’s owner and operator, Canberra Airport Group (CAG).

The project involved the construction of a new terminal and precinct, which includes new roads, car parking and taxi facilities, and aircraft aprons. The precinct is south-west of the intersection of the two runways.

Design and engineering works on the project were initiated in 2007, followed by preliminary construction works in 2008.

The new buildings replaced the existing airport infrastructure, which was considered sub-optimal both financially and operationally.

Construction of the terminal precinct

The development project was executed in phases in order to avoid interruption to passenger operations. Phase one construction was initiated in 2009 with a budget of $350m. It included the construction of a new southern concourse terminal with 26,000m² of floor space, a Qantas Club Lounge, and new check-in and baggage facilities. With a capacity to handle 3.5 million passengers a year, the first stage became operational in November 2010.

Completed in March 2013, phase two also included the development of a new four-storey car park, and a fully-enclosed taxi rank with television screens and other services. CAG spent approximately $420m on phase one and two, combined.

The third phase of construction, which included large-scale construction works, was initiated in 2013, with the majority of works being completed in March 2014.

Other ongoing projects within the terminal precinct include the development of a dedicated business area featuring private desks, seating modules and mobile charging stations. An interactive play area for children is also under development.

It also features floor-to-ceiling windows that allow natural light into the building and provide a view of the runways.

Sustainability of the new terminal at Canberra Airport

The new terminal uses a combination of water and energy-saving features. Its roof can harvest approximately 1.3 million litres of water, which can be re-used for washrooms, air-conditioning and landscaping.

Two tri-generation plants generate power using gas and by capturing waste heat. The energy is used to cool and heat the buildings, resulting in a 75% reduction in carbon emissions compared to the old terminal.

Techniques including waste recycling, low-energy fittings and fuel reduction have been adopted to further reduce the building’s environmental footprint.

The construction contract was awarded to a local firm named Construction Control.