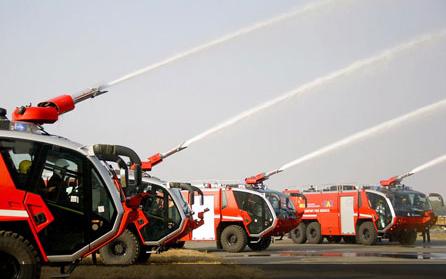 The turntable ladder is useful for aerial fire-fighting and evacuating passengers during an emergency situation.

Using a large telescopic ladder, the turntable ladder can be raised to a height of 32m and turned horizontally and vertically to control fires occurring at a greater height.

The apparatus, which can be deployed quickly, is suitable for rescue operations that involve mass evacuations of uninjured and causalities during an emergency situation in an aircraft.

Delhi International Airport CEO Prabhakara Rao said that the turntable ladder is a boost to the airport’s fire-fighting and rescue capabilities, and the airport already has 11 Rosenbauer crash fire tenders, which are positioned at four fire stations.

"We have a deep sense of responsibility and like to be prepared for any emergency," said Rao. "Our fire tenders are a vast improvement over the ones we had in the past. Each vehicle has 12,500l of water and 1,500l of foam compound."

The turntable ladder is also capable of executing high-rise tasks such as a sky lift, and it can be deployed in confined spaces and relocated easily for other duties.

The equipment can perform multitasking roles and can also be used as a crane.