Subject to the nod of the Government of India, the agreement is expected to become effective in February next year.

A code sharing agreement allows airline companies to sell seats on a flight operated by another company.

The agreement also enables airline companies to market the same flight under their own airline designator and flight number. 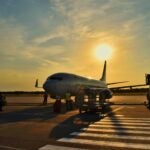 As per the agreement, IndiGo customers will have access to Air France and KLM global network, which covers more than 250 destinations across the globe.

The Air France and KLM network comprise 120 destinations in Europe and about 50 in the America.

Additionally, the code share agreement with IndiGo is expected to benefit Air France and KLM customers, as they will have access to 25 new destinations in India.

Currently, Air France and KLM cover four Indian destinations including Delhi, Mumbai, Chennai and Bengaluru, from their hubs in Paris and Amsterdam.

Previously, IndiGo is also said to have reached code sharing agreements with other carriers such as Turkish Airlines, Qatar Airways and American Airlines.