About 35km away from the centre of Istanbul, on the European side of the city, over 31,000 people are diligently working to build Istanbul New Airport (INA) in record time. Once completed later this year, it will stand as one of largest infrastructure projects in the country’s history, priced at $11bn.

Although construction only began in 2015, 78% of the airport is already complete and operations are expected to officially begin on 29 October, when INA will take over all commercial flight operations from its sister airport Atatürk, a long-congested destination that has been operating past its capacity for the last few years.

But although the airport is readying for its inaugural first landing in February, followed by the start of public operations in October, the work is far from done. Construction is expected to continue until 2028, with the aim to ultimately build a true world-class aerotropolis, complete with office buildings, hotels, mosques, medical centres, trade fair and conference centres.

“The first phase of the construction is finally coming to the end,” says Yusuf Akçayoğlu, CEO of İGA Airports Construction, which was awarded the contract for construction and operation of the new airport. This summer, trials and simulations involving more than 200 different scenarios are going be implemented, so that stakeholders become familiar with the airport’s operations.

“The opening of Istanbul New Airport will be the world’s largest airport transfer to date,” Akçayoğlu says.

“Due to the fact that Istanbul New Airport is the biggest infrastructure project in Turkey, it will have a huge impact on Turkey’s economy,” Akçayoğlu says.

According to the Economic Impact Analysis report, once fully completed, INA will make a 4.89% contribution to national income per capita, as well as providing 100,000 direct and 150,000 indirect jobs. Its contribution to the tourism sector is estimated to be $7bn.

Its location, chosen by the state authority, will take over 76.5 million square metres northwest of the city, replacing in part large swathes of forested areas. According to İGA, the project site had been devastated by mining activities since the 1980s and, before construction started, about 65% of the project site had lost its natural environment.

“The location was an inefficient area covered with dirt and mud,” Akçayoğlu says. “We are transforming this inefficient field into the new aviation centre of the world.”

Developers promise the airport will be fully connected by high-speed train, metro, bus and car and thus it will be “fully integrated with Istanbul’s transport infrastructure”. A brand new metro line from Gayrettepe to the airport was still under construction in November last year, with no further updates on the project’s status as of yet.

So far, more than 1.5 million square metres of earth has been moved through excavations and levelling activities. What will rise on this space is primed to be an astonishing airport made up of three terminals (one of which is to become the world’s biggest), six parallel runways and the capacity to welcome 90 million passengers per year in its first phase. Later expansion works will raise this to 200 million passengers once fully complete. In preparation, Turkish Airlines announced it will add 40 wide-body aircraft to its fleet.

“During planning and building the different technology tools, we always had our passengers in mind,” Akçayoğlu says. “[INA] will be an airport that will consist of the newest technology and standards. Around 3,000 monitors will inform our passengers throughout various zones. In addition to this, iBeacon technology will provide indoor directions, walking times to gates, lounge access and boarding alerts.”

The baggage system alone will reach a length of 42km, equal to the distance between Taksim and Tuzla, and its system will be able to handle over 30,000 pieces of luggage per hour.

“Istanbul New Airport’s contribution to the tourism sector is estimated to be $7bn.”

In terms of design, İGA promises that the terminals will “reflect the richness and beauty of Istanbul’s historical structures”.

Once INA opens, it will become home to around 150 airlines and offer flights to 350 destinations, while Atatürk will be turned into a mixture of exhibition halls and a destination for charters, private jets and training aircrafts.

“Carrying out all the works at the same time is the biggest challenge for us,” Akçayoğlu admits. “While we were laying the foundations of construction, we made soil moving, designing, manufacturing and mobilisation at the same time. Every process had to be done very quickly and in parallel. Another challenge at the beginning of the project was to put a whole team together within three months. In the end I think we came successfully through all of these challenges.”

According to reports in the local press, construction is currently being sped up in order to allow the first plane to land on 26 February, on President Erdoğan’s 64th birthday.

Concerns over deforestation pave the way to INA’s opening

But despite developers’ claims that the airport’s site was more or less a wasteland before works began, environmental campaigners believe the airport will wipe out precious hectares of forests and with them, the livelihoods of farmers, as well as one of Istanbulites’ last remaining areas of natural beauty neighbouring the country’s financial capital.

In 2015, protesters representing Kuzey Ormanları Savunması (North Forest Defence), an organisation which campaigns to protect forests to the north of Istanbul from industrialisation and urban sprawl, showed up on the construction site marching with a banner depicting Erdoğan as a bulldozer uprooting a tree.

The organisation staunchly opposes the airport, as well as a host of other mega industrial projects such as the third bridge and Kanal Istanbul.

“Environmental campaigners believe the airport will wipe out precious hectares of forests.”

“Instead of being planned as a city whose habitants can lead a healthy and happy life, Istanbul is [being] transformed into a growth engine that would shoulder the country’s economy,” North Forest Defence wrote in its 2015 report. “We have been experiencing a ruthless period where natural areas […] and ecosystems of thousands of years are being rapidly consumed under the state-controlled transformation that prioritises capital gain over public gain and is aimed at capital accumulation.”

One of the campaign’s arguments is that, far from being just an airport, the commercial and industrial area making up the future aerotropolis will spread even further, creating more damage: “green lands, water basins and great divides will be further plundered and the population that will flow into the region as well as the traffic they will create will destroy the North Forests irreversibly.”

Indeed, INA has grand plans for the future. The next phase includes more than 100,000m2 of retail space, hosting the biggest Duty Free zone in the world, with more than 400 national and international brands. This will be accompanied by a plaza and Europe’s largest parking garage, with space for 24,000 vehicles. 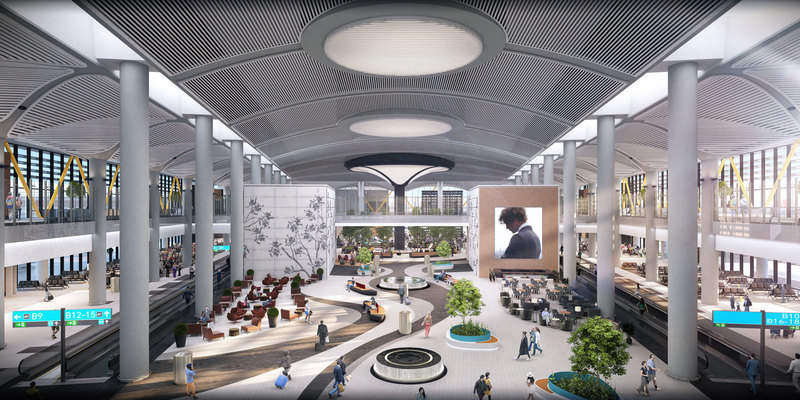 “I can guarantee that every step we made in building Istanbul New Airport is well thought of,” Akçayoğlu says.

“Our first decision just after the tender award in May 2013 was to carry out an Environmental and Social Impact Assessment at the highest international standards to understand our impacts in that manner and plan necessary actions to minimise these impacts.”

Last year, the project received the Corporate Social Responsibility Program of the Year Award at Stevie International Business Awards 2017 for its efforts to minimise its impact for the 16,000 people directly and indirectly affected by construction.

“Since this is a build-operate-transfer (BOT) type project, we’ve taken this as an opportunity by embedding our sustainability goals at the very early stages of our plans like integrating requirements of ENVISION and Green Airport for all activities within the project boundary and LEED for buildings. We’ve integrated these requirements to all our tenants’ contracts also. We are really very tough on these.

“We are changing sustainability culture in Turkey. In my opinion, we have a very good track [record] on this,” Akçayoğlu adds.