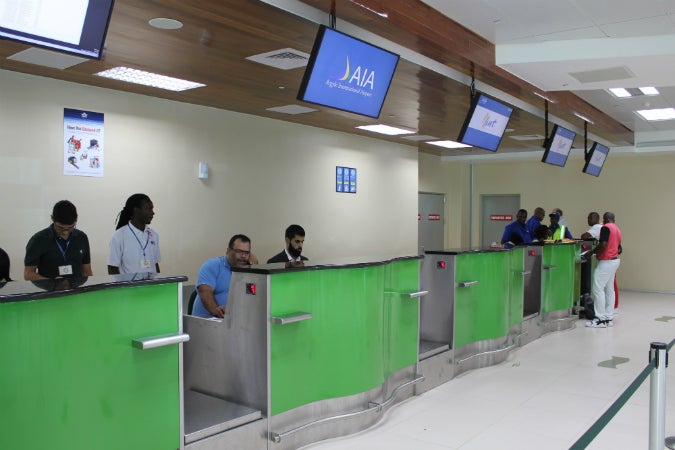 Gate Technologies are proud to have been present at a momentous event for the Caribbean island of St Vincent when the new airport was opened on 14 February 2017 by the president Dr Ralph Gonsalves with many heads of state present from neighbouring islands including Venezuela’s President Nicolás Maduro.

This lush volcanic island is close to Barbados and an entry point to tourists travelling to other spectacular and beautiful parts of the Grenadines chain such as Bequia, Mustique and Grenada. Visitors have for many years passed through a small terminal close to the capital Kingstown but the constraint of the location has been a runway accommodating only smaller planes. Direct flights from Europe land at Barbados, St Lucia or Grenada but not at St Vincent until now.

The new terminal was truly a cause for great joy locally, signified by a national holiday, as the island now embarks on an exciting new phase of development with this dramatically improved gateway. The new airport has been many years in the making and the International Airport Development Company (IADC) and has overcome a number of significant obstacles such as the lack of sufficient flat space for a runway of adequate length. This latterly solved finally by blast removal of a small mountain – a considerable feat on its own.

Funding such a major project was also a huge task and in this aspect a Barbados-based company NSG played a major part bringing finance from British banks amongst others, also managing procurement of key items such as baggage handling, screening equipment, fire tenders and more.

Gate Technologies were selected by NSG after competitive tender to provide all of the public service counters for the project including those at check-in, passport booths departure gate desks and concession desk, as well as baggage weigh scales and customs desks. Roller tables and ancillary furniture in security lanes also formed part of the scope with a total project value of $500,000.

The design of the counters was chosen by the project architect Mr Romel Ollivierre, to complement the theme of the building which uses colours and design features creatively to reflect the proud individuality of the island. Check-in desks feature a wave style and are manufactured using a vitreous enamelled steel which is extraordinarily durable and provides permanent non-fading bright colours. A vibrant green is used in the international departures hall, with a complementary blue in the domestic hall.

All of the counters were manufactured by GTL in the UK and are constructed from a contemporary pallet of materials including glass, stainless-steel and natural granite in addition to the specially finished low-carbon steel.