More than 30 years of experience in the field makes SICURIT one of the most reliable and technologically advanced companies in the security market for state-of-the-art outdoor perimeter solutions.

The versatility of our product line, and the know-how and experience of our engineers, place SICURIT in a constantly growing niche market that requires the highest standards of quality and world-class manufacturing infrastructure.

Our detailed attention to the manufacturing process, from the choice of raw material up to the exhaustive tests carried out by our specialists, and the maximum availability of our personnel pre and post-sale have achieved the trust of major players in the security market worldwide.

SICURIT is a trusted supplier to many highly sensitive areas, with products deployed for the protection of civilian, industrial and military sites, installed in airports, government compounds, financial institutions, electrical and nuclear facilities, military bases and correctional facilities.

SICURIT has achieved ISO 9001:2000 certification, and globally recognised quality standards that ensure we provide the highest quality products and services.

The ABSOLUTE PLUS perimeter detection system is in growing demand for reliable outdoor perimeter protections, where reliability is intended as the maximum capability of detection while ensuring the lowest nuisance / false-alarm rates in all environmental conditions.

ABSOLUTE is a state-of-the-art combination of multiple security technologies, IR beams and microwave sensors that can discriminate false alarms with impressive accuracy compared to traditional systems. Models include:

The DAVE digital microwave barrier represents a further technological step forward in outdoor perimeter protections. It has been designed for quick and easy installation and is suitable for any kind of environment that requires medium-high security standards.

The implementation of the microprocessor strongly increases the detection accuracy and enables discrimination of unwanted targets with much higher precision compared to standard microwaves.

Intrusion detection, using a modulated amplitude sensitive system, takes place within the invisible pattern of microwave energy existing between transmitter and receiver. Changes in signal amplitude at the receiver are directly related to the object’s size and density, allowing the sensor to discriminate between objects.

The INFRATRONIC long-range Passive Infrared Detector (PIR) has been developed for detection of intruders up to 150m away. It can protect large buildings and be used in combination with already existent CCTV systems.

INFRATRONIC is a passive device designed to detect any intruders by his movement and infrared contrast against the background. Two curtain sensing areas provide the alarm only when they detect infrared radiation emitted by a human body entering in the first curtain and leaving the second curtain. The detection algorithm eliminates slow temperature changes and avoids nuisance alarms caused by animals, birds and moving vegetation.

Since IFR150XTs only react to infrared radiation, they can be used during day and night as well as under changing climatic conditions such as fog, rain and snow. The robust IP65 weatherproof aluminium housing is supplied with a installation bracket.

An easy optical alignment is provided through a built-in viewfinder. Precise optical protection can be obtained through the accurately defined sensing curtain. The connection cables are completely invisible and equipped with concealed cable channel inside the bracket.

INTERFACE BOARD AND WINDOWS-BASED PROGRAMMING SOFTWARE

The MBRD system is a state-of-the-art communication tool that allows security installers and system integrators to program ABSOLUTE PLUS and DAVE barriers through PCs and laptops (via RS485) with much more accuracy compared to traditional manual settings.

An additional MBRD feature is the faster system diagnostic that allows security operators to check barriers status at any time directly from the control room.

Sicurit's new digital microwave represents a further technological step forward in perimeter protections. It has been designed for quick and easy installation and is suitable for any kind of environment situation that requires medium to high standards. The major innovation is the imple 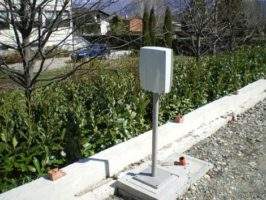 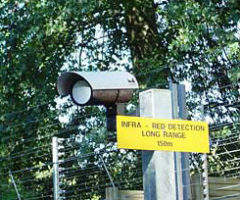 Sicurit's new digital microwave represents a further technological step forward in perimeter protections. It has been designed for quick and easy installation and is suitable for any kind of environment situation that requires medium to high standards. The major innovation is the imple