Cannon Load Banks manufactures lightweight load banks that are small but powerful. Our portable banks are used around the world at most major airports, used to accurately replicate the load a power source will see in a practical application. All of our products weigh less than 60lb. 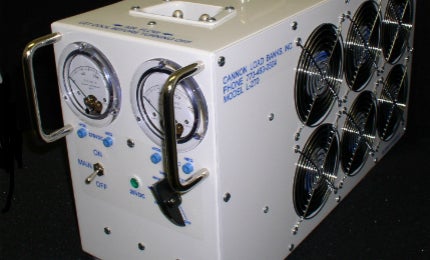 Cannon Load Banks manufactures lightweight load banks that are small but powerful. Our portable banks are used around the world at most major airports to accurately replicate the load a power source will experience in a practical application. All of our products weigh less than 60lb.

The L-100D is one of our most popular load banks. Portable and digital, the it weighs just 45lb. This load bank is designed to provide field servicing and testing capabilities for 400Hz, 200VAC ground power units.

With a digital load bank, you can measure volts, amps, frequency, and load (in kilowatts). With the L-100D, you can run an overload through 90kVA ground power units for testing purposes.

Even though this lightweight bank weighs 34lb, the powerful L-72 has the capacity to operate at small 9kW stages to achieve the required load for testing purposes.

L-120 banks can provide a temporary load of up to 120kW. The power of this portable bank allows it to test ground power units of up to 150kVA.

This 400Hz load bank weights less than 60lb. The variable load steps on this unit allow you to gather up to 100kW.

The L-120 is Cannon Load Bank’s most powerful product. This maintenance bank can be used to put significant loads on larger ground power units for maintenance purposes.

This DC load bank is used to test the starting capability of 28VDC 1,600A ground power units. The load created by the L-28VDC is the same as the turboprop produced when an aeroplane starts its engines.

This automatic bank starts with a load of 1,600A, dropping by 300A until no power is left, after 35 seconds. The L-28DC has a fixed load of 300A for testing and maintenance of ground power units. This is a powerful load bank that weighs only 43lb.

The L-29 DC is our most powerful DC bank, and can replicate the current of a ground power unit from 2,000A to 0A in 35 seconds. This bank applies a fixed 300A load for the testing and maintenance of DC ground power units. It has a weight of 49lb.

It is used by the military to trial new ground power units for jets that require both 400Hz and 270VDC load banks.

We build custom load banks for several aircraft manufactures. The boxes are kept to the same size, but we can vary the load steps and total capability of the bank to meet customers’ needs.

We have been serving our customers for almost 30 years. Our reputation for high-quality portable load banks is known throughout the industry.