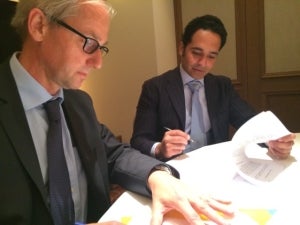 Egis and ICAD have signed a strategic partnership at the end of 2014 with the objective of jointly developing commercial business in the Middle East and North Africa.

This partnership was signed by Cédric Barbier, director general of the Egis subsidiary specialising in aviation and Sh. Mohammed Bin Laden, president of ICAD.

The two companies are already collaborating in a project focused on the integration and commissioning of air traffic management and communication, navigation and surveillance systems of a new control tower at a major middle eastern airport. The companies actually have strong synergies in their systems engineering activities in aviation, particularly in design, integration and validation of airports and air traffic control systems.

Through this agreement, teams from both companies will work closely together in order to develop synergies and propose solutions that cater for the needs of the ambitious Middle East and North Africa aviation markets.

This agreement emphasizes "the will to jointly propose performance solutions to airport and air traffic management stakeholders in an area where the growth of air traffic is around 5% per year for Africa and displays double digit values for the Middle East. New ambitious airport projects are planned in Jeddah, Riyadh, Dubai, Kuwait and Bharain, as well as other major Middle Eastern gateways," said Cedric Barbier.

This new agreement is a strong sign of Egis strategy in the development of its activities in this geographic area, particularly in the Middle East where the group is expanding its aviation team and will be moving to a new regional office in Dubai.

Egis has a long history in the Middle East and has completed a significant number of aviation projects since 1975. The company’s major projects in this area include Al Udeid Airbase design and PMC (1980); Design of the new terminal at Jeddah Airport (2008); and technical and financial audit of the New Doha International Airport (2007).