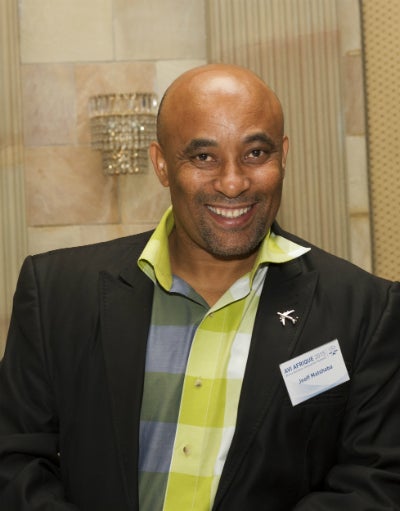 Despite the current financial turmoil, the World Bank estimated Sub-Saharan Africa’s growth at 3.7% for 2015, with a slight uptick to 4.4% and 4.8% in 2016 and 2017 respectively. Six African countries feature in the bank’s list of the 13 economies projected to grow the fastest between 2014 and 2017.

"There’s no doubt that the African growth story remains resilient in the face both of global and continental challenges. However, in order to capitalise on our growth potential, we have to ensure that we have integrated transport solutions in place to promote regional, continental and inter-continental trade," says Jeoff Motshoba, Executive of Air Traffic Management/ Communications, Navigation and Surveillance at Air Traffic and Navigation Services (ATNS). "Aviation, in particular, has a critical role to play in providing the kind of infrastructure that a competitive modern economy needs."

Motshoba believes that two primary barriers are inhibiting the growth of African air travel: physical infrastructure and safety. The former includes both airports and fleet, and here great strides are being made as new airports are commissioned and Africa’s aircraft fleet gets younger.

Safety, he believes, is rightly considered to be the primary barrier facing Africa’s aviation industry. African aviation has long had a poor safety record, with the average number of air traffic accidents nine times higher than the global average in 2011. However, things seem to be improving; its 2015 safety record was better than any year in the 2010-14 period.

Motshoba says that ATNS is playing a leading role in helping to improve safety by spearheading moves to create a single upper airspace management control capability for the Southern African Development Community (SADC) region. "By managing the region’s upper airspace holistically we will not only reduce the cost of air travel, we will make it significantly safer," he says. "It’s one of the things mandated by the Yamoussoukro Declaration, which was signed in 1999 but which is not yet fully implemented."

The declaration calls for the liberalisation of African skies for African airlines, and the establishment of a single African air transport market. ATNS as the lead operator of the SADC initiative is acting as advisor and liaison with the equivalent organisation in the north of Africa. This kind of integrated approach will also save money as expensive technology can be shared.

One example would be the Very Small Aperture Terminal (VSAT) network created and operated by ATNS, which has been providing communication services to air traffic authorities across the SADC region for the past ten years. Egypt manages a similar service for the northern region.

"Making sure that we roll out an air traffic infrastructure that makes use of the best technology is one side of the coin; the other is having a deep pool of talent with the skills needed to use that technology," Matshoba points out. "ATNS is playing an important role here, too, with our Aviation Training Academy being one of the continent’s leading trainers of the air traffic controllers and engineers of the future."

The ATNS Aviation Training Academy is IATA’s regional training provider for the Africa-Indian Ocean region, and it was one of IATA’s worldwide top regional training partners in 2011, 2012, 2013 and 2014. In addition, the academy was named a Regional Training Centre of Excellence at the end of 2015 by the International Civil Aviation Organization (ICAO), one of only 16 globally.

The post-2015 UN development agenda presents a vision that seeks to achieve inclusive, people-centred, sustainable global development: ‘the future we want’. This calls for a broad approach to development, based on social justice, structural transformation, economic diversification and growth.

Air transport is a vital enabler for Africa’s economic growth, and Matshoba believes the industry offers huge potential. He believes that South Africa, as the continent’s most advanced aviation market, has the opportunity and obligation to help build this vital piece of Africa’s infrastructure.