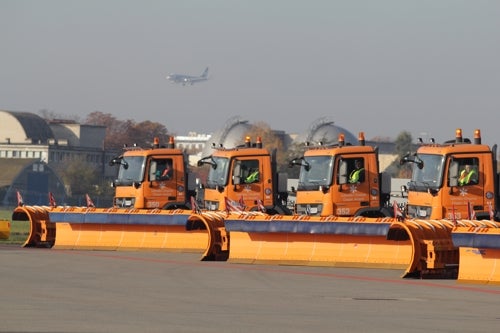 Featuring a 6.8m-wide snowplough mounted on a Mercedes Benz Actros truck, the new equipment also incorporates sweepers with a 5.5m-wide broom system and a powerful blower.

The Damman liquid de-icing agent spreader will allow the removal of snow from runways in around 25 to 30 minutes.

"Both snow clearing equipment operators and mechanics responsible for its maintenance and repairs are capable of working in harsh winter conditions," Michalak said.

"We are well prepared for the upcoming winter and you can rest assured that we will do our best to make sure passengers and cargo get to and from Warsaw on time and without any problems."

"The Damman liquid de-icing agent spreader will allow the removal of snow from runways in around 25 to 30 minutes."

"Combining cutting-edge technology with experienced staff we can effectively prevent such conditions as black ice and, consequently, guarantee the highest possible safety of aircraft operations."

The airport also deploys a separate system at measurement points on the access roads heading towards Terminal A, which spreads a special anti-icing agent on the roads towards the departures hall, offering clear and safe view of the roads.