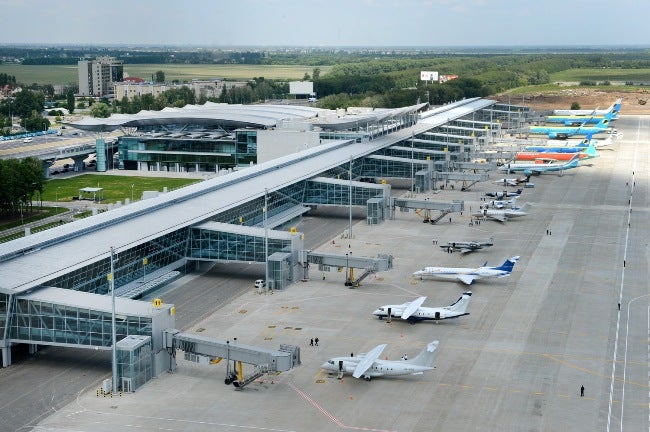 Ukraine has opened a new $600m terminal at Boryspil International Airport ahead of EURO 2012, which the country is co-hosting with Poland.

The terminal took three and half years to complete and will help the airport serve an estimated 15 million passengers each year.

Ukraine President Viktor Yanukovych said: "We are well aware that this is an investment of our generation to future generations, who will then operate all of the objects of EURO 2012."

The terminal is equipped with 11 jet bridges that can serve 20 planes at a time, including six large jets and five medium jets, while the 183,000m² apron can park about 25 planes.

Terminal D will also be equipped with pavements and moving walkways for smooth passenger transfers, while the terminal’s baggage handling system can process 3,000 bags an hour.

The departure area of the new terminal is equipped with 61 check-in stands, 18 air security control checkpoints and 28 passport control booths.

Boryspil airport currently handles 62% of the country’s passenger traffic and recently boosted its capacity by opening terminal F, which can accommodate 2,400 passengers every hour.

In a move to support EURO 2012, Ukraine has also constructed new terminals at airports in host cities, which include Donetsk, Kharkiv and Lviv, as well as expanding the capacity of Zhuliany international airport in Kyiv.

Construction work on the new terminal was completed by a joint venture led by Dogus-Alarko-YDA.

Image: The new terminal, which was built in three and a half years, will serve passengers visiting Ukraine during EURO 2012. Photo: courtesy of Ministry of Infrastructure of Ukraine.