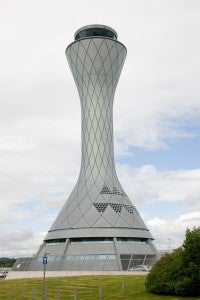 The new system will provide precise surveillance for separation of flights at Edinburgh airport.

"This technology is a more flexible long-term solution that is more accurate and suitable for this operational requirement than a traditional MSSR," Harris said.

Through the use of multiple non-rotating sensors to triangulate aircraft location based on transponder signals, the new WAM system will provide air traffic controllers with accurate positioning of aircraft and recognition information in any weather conditions.

According to Saab Sensis, each of the deployed multilateration sensors will support Automatic Dependent Surveillance – Broadcast (ADS-B) and provide a solution for current surveillance requirements and future avionics.

The system will deliver effective surveillance to improve the safety, capacity and efficiency of airspace and surface operations, through its higher update rate and improved positional accuracy, according to Saab Sensis.

In the UK, Saab Sensis’ WAM has been already employed by NATS to provide aircraft surveillance in North Sea airspace and at London’s Heathrow, Gatwick and Stansted airports for surface multilateration.

Image: The new WAM system is the first operational deployment of WAM surveillance at a UK airport which supports radar separation service. Photo courtesy of: NATS.