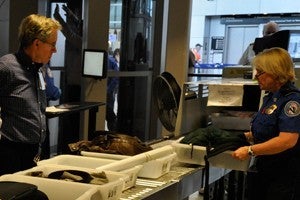 The move is part of a TSA plan to improve risk-based, intelligence-driven counterterrorism approaches at the country’s airports.

CAT-BPSS is designed to detect fake boarding passes and falsified IDs, and will compare and validate machine-readable and human-readable data from a passenger’s ID with the boarding pass.

TSA administrator John Pistole said: "The ability to efficiently and effectively identify fraudulent identity documents and authenticate boarding passes has the potential to not only improve security but also the checkpoint experience for passengers."

The system can also be employed with boarding passes printed on a PC or provided by the airlines on paperless boarding passes, received by the passengers on their mobile devices.

The IDs, including passports, drivers’ licences and permanent resident cards, will be equipped with encoded data in the form of barcodes, magnetic stripes, embedded circuits and machine-readable text.

The system is also capable of capturing and displaying the passengers’ photographs, and will delete the data following the completion of verification.

Passengers will then give up their IDs to TSA members to be scanned, while they will have to self scan their boarding passes.

The contract for the delivery of pilot testing of fake document detection technology was awarded to BAE Systems, Trans-Digital Technologies and NCR Government Systems.

Under the contract, the three companies will provide the selected airports with six detection units, two units from each company, further allowing TSA to increase the deployment plan, following implementation and testing.