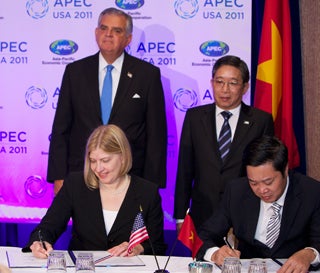 Parsons Brinckerhoff has received a contract from the Airports Corporation of Vietnam (ACV) to carry out a feasibility study for the redevelopment of Chu Lai International Airport in Da Nang, Vietnam.

The study, funded by a $538,886 grant from the US Trade and Development Agency (USTDA), will analyse the transformation of the airport from a small airport into a regional cargo hub to serve rising industrial areas, while transforming it into a major commercial facility.

The study will also explore ways to update the airport’s current master plan, determine integration of cargo into its operation, as well as assess private sector investment opportunities for the airport’s development in future.

Parsons Brinckerhoff’s study will assess future passenger and cargo traffic, identify the infrastructure and equipment needed for the modernisation and establish a financial plan for the expansion of the airport with a focus on cargo services.

The airport’s master plan currently includes a two-phase development that would be completed between 2015 and 2025.

Under the master plan, the Civil Aviation Administration of Vietnam is aiming to increase the passenger handling capacity of the airport to four million and cargo handling capacity to five million tons by 2025.

As part of the first phase of the project, the airport would undergo upgrade work on its east side, including the addition of a second runway, taxiways, cargo terminal, navigation equipment, fire services, administrative / operational facilities and capacity to handle 25 aircraft simultaneously.

The second phase of the master plan would focus on the west section of the airport and would boost the airport’s aircraft handling capacity to 46 aircraft.