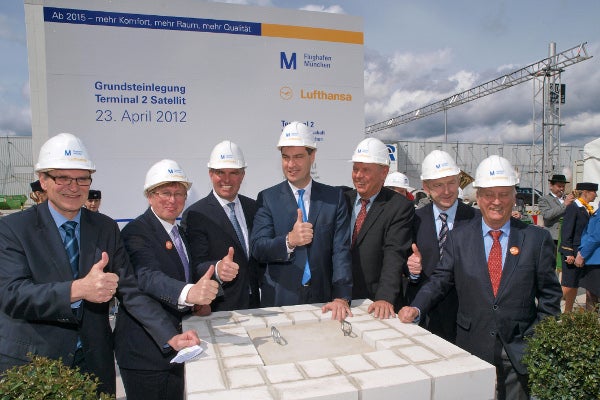 Munich Airport in Germany has broken ground on a new €650m satellite building at Terminal 2.

The 125,000m² satellite building will be built on the airport’s eastern apron as a functional element of Terminal 2, featuring and will include two Lufthansa Service Centres with 24 transfer desks and 42 passport control stations.

Expected to be completed by 2015, the satellite building will also feature 9,000m² of shops and restaurants and five Lufthansa lounges, which is double the number of lounges in and around Terminal 2.

Connected to Terminal 2 through an underground personal transportation system (PTS) and further by automatic trains operating in a 400m long tunnel under the apron, the new facility will provide the airport with the capacity to handle an additional 11 million passengers each year.

Bombardier has been awarded the contract to build the two-track PTS that will link the satellite building with Terminal 2, where all passengers will still check-in on departure and pick up luggage on arrival.

PTS will feature three driverless, four-wagon trains capable of operating at speeds of about 30kmph and carry up to 9,000 passengers an hour in each direction.

The airport said that work on the project has already begun with various preparatory steps expected to be finished by the end of May, followed by the structural work on the southern side.

While the facility’s interior finishing work and technical equipment will follow beginning in the spring next year.

Following the completion of the project, the satellite terminal is expected to begin operations in 2015.

The general planning of the satellite facility will be done by the Munich firm Koch + Partner, while the total cost will be shared by Flughafen Munchen (FMG) and Lufthansa on a 60:40 basis.

Munich airport has reported a 5% rise in passenger traffic to 8.5 million passengers during the first quarter ending March this year, when compared to the corresponding period in 2011.