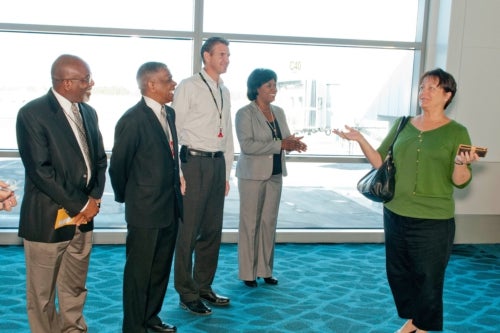 The 226,000 ft² facility has been installed with a baggage handling system and houses Bahamas Immigration and Customs, four restaurants, lounges and six hotel reception lobbies.

The new international terminal is part of the second phase of airport redevelopment being carried out by Nassau Airport Development Company (NAD).

The first stage of the development included construction of the 247,000ft² US Departures Terminal, which opened in March 2011.

Design for the international terminal started during the first phase of development and was built using a mix of 50-50 solid and glass to offer maximum natural light and roof overhangs for natural shading and cooling.

The third phase of the development will start soon, which involves the construction of a 112,000 ft² Domestic and International Departures Terminal, with the Domestic Arrivals Terminal scheduled to open in 2013.

"The new international terminal is part of the second phase of airport redevelopment being carried out by Nassau Airport Development Company."

After completion of the three phases the terminal area will span 585,000 ft², with an additional one million square feet of aircraft operating space.

Expansion of the aircraft space will be increased to accommodate up to 12 aircraft, compared to the current capacity of five, and have space for six additional international aircraft.

Tourism generates around 75% of the country’s GDP, a figure which could rise further following expansion.

The terminal currently has the capacity to handle 3 million passengers and, after completion of all three phases, this will increase to 5 million.

Image: The new International Arrivals Terminal at Lynden Pindling International Airport was developed as part of second stage of the airport’s redevelopment programme.