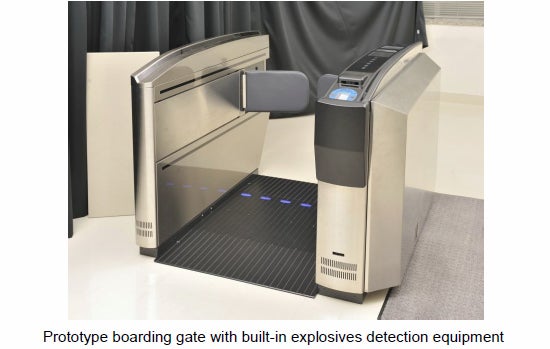 Hitachi, together with the Nippon Signal and the University of Yamanashi in Japan, has developed a prototype boarding gate with an integrated explosives detection system to be used in airports.

According to Hitachi, the extraction and collection of the minute particles has been accomplished by improving air flow generation timing, location of the pass and air current speed.

Hitachi has also employed centrifugal technology to allow rapid separation and collection of only particles from the unnecessary gas, allowing the particles to be exposed into the mass spectrometer for collection and concentration in a short time.

By performing inspection ahead of passenger boarding, the new technology is expected to prevent and control the entry of carry-on explosives.

The new boarding gate will not disrupt the flow of passengers and claims to provide enhanced security, allowing airports to inspect 1,200 passengers an hour.

"The new boarding gate will not disrupt the flow of passengers."

The new prototype boarding gate can also be deployed as entrance security equipment for train stations, stadiums and event halls and expand safety and security of public places.

Hitachi is also planning to perform pilot tests of the new prototype boarding gate at public transport facilities in 2013.