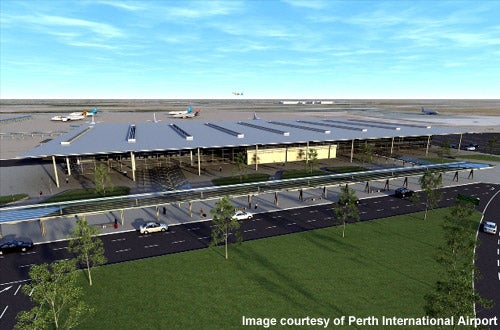 Built Environs, a unit of the McConnell Dowell Group has secured a A$330m ($343.8m) contract from Perth Airport in Australia to construct a domestic pier and expand international departure spaces.

The company will expand the international departure area at the western end of the current terminal and build the domestic pier, which will be used as a home base for Virgin Australia airline.

Expanded international departure space will include 18 check-in desks, three airlines lounges and two aircraft gates equipped with a pair of aerobridges, capable of serving A380 aircrafts.

Perth Airport chief executive officer Brad Geatches said that the project is one of the four that the airport is undertaking to transform airport experience of international passengers.

"This year, passengers will start to see big changes in the international travel experience," Geatches said.

During the project three aircrafts gates with twin aerobridges at each gate will be built, which can handle A330 aircraft, as well as construct four other aircraft gates.

"The project is one of the four that the airport is undertaking to transform airport experience of international passengers."

The project also includes a new baggage reclaim area on the ground floor with a link to the taxi and parking facilities, a shopping area and a Virgin Australia lounge.

"This project, along with the new Domestic Terminal (T2), represents the first stage in achieving our vision of having all commercial air services operating from one convenient location," Geatches added.

The Virgin Australia terminal will be linked to the under-construction T2 domestic terminal at a cost of A120m ($125m), while walkways will connect the two terminals airside.

Scheduled to be completed in mid-2014, the project will form the first phase of Perth Airport’s four phase development.

"Planning is also well underway for further expansion, including a landscaped forecourt, multi-storey car park and additions to the eastern end of Terminal 1, to further enhance the customer experience, and design concepts are well advanced,"

Image: Perth Airport had commenced a $1bn expansion and redevelopment in July 2008.