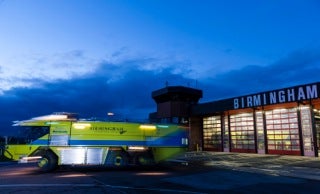 Birmingham Airport in the UK has deployed an alert system incorporating Zetron communications’ consoles to ensure faster crew response in case of an emergency.

Deployed as part of a project to merge airport fire services and operations in a single control room, the three Zetron DCS-5020 digital consoles are aimed at offering operators with touch-screen control over dedicated safety-related communications channels.

The communication channels include ground and air band radio, hotlines to air traffic control and fire crews, and off-site fire and ambulance centres.

According to the firm, the consoles, which can be fully configurable, allow operators to involve outside agencies and specify a flow chart-like presentation with a logical hierarchy of actions.

Birmingham Airport control centre manager Chris Wilson said: "They effectively start at the top and work their way down to the bottom of the screen."

Operators have used the system to note down emergency calls from air traffic control and then transmit the information to fire crews, while the DCS-5020’s programmability will automate such alerts.

During the process, when the airport control receives emergency calls, the new technology provides live conversation to fire crews over the fire station PA system and allow rapid assessment of the required response.

"The consoles, which can be fully configurable, allow operators to involve outside agencies and specify a flow chart-like presentation with a logical hierarchy of actions."

In the interim, the Zetron system switches on fire station lighting and opens the main doors all set for fire tenders to depart.

Incorporating up to 30 telephony and digital and analogue radio channels under finger-tip control, the DCS-5020 digital console can support 16 customisable screen-based operator consoles.

In September 2012, the airport witnessed an incident when an aircraft overshot the runway, which was first live incident following the commissioning of the Zetron system.

"Although this was a minor incident, it did require a response by the airport’s fire and rescue service and everyone involved was very pleased with how the system performed," Wilson said.

Image: Birmingham Airport has deployed Zetron DCS-5020 Digital Console as part of its project to merge airport fire services and operations in a single control room. Photo: courtesy of Zetron.