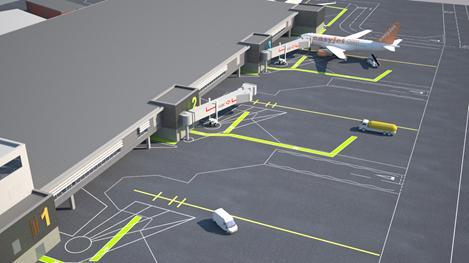 Vinci Construction has won an £183.9m contract to transform Gatwick Airport's Pier 1 in the South Terminal.

The project, which is the largest capital investment since the airport's change of ownership three years ago, involves the demolition of the existing Pier 1 to make way for the new building, as well as taxi-way enhancements on the airfield.

Expected to be open in summer 2015, the new two-storey building will feature air-bridges to connect it to five new aircraft stands, a new baggage handling system (BHS) and gate rooms with new check-in options.

Gatwick Airport piers and infrastructure head Ben Green said: "Over the last two years we have been transforming Gatwick, both in the service we provide and structurally, to become London's airport of choice."

The initial phase of the project involves the addition of a new hold baggage screening (HBS) system that checks passengers' bags at any one of the nine check-in zones and delivers to the existing and new BHS.

"The project involves the demolition of the existing Pier 1 to make way for the new building, as well as taxi-way enhancements on the airfield."

Enabling faster processing of bags, the new HBS is set to give airlines the opportunity to deploy automated fast-bag drops.

Jason Griffiths, regional director at VINCI Construction's UK air division, said: "Our extensive expertise in air infrastructure will ensure we can work closely with Gatwick Airport to complete the complex works within a live operational environment and to the highest standards of safety and quality."

Featuring new seating and child-friendly zones, the new building is aimed at facilitating passengers in finding their way, as well as offering facilities that cater to their requirements.